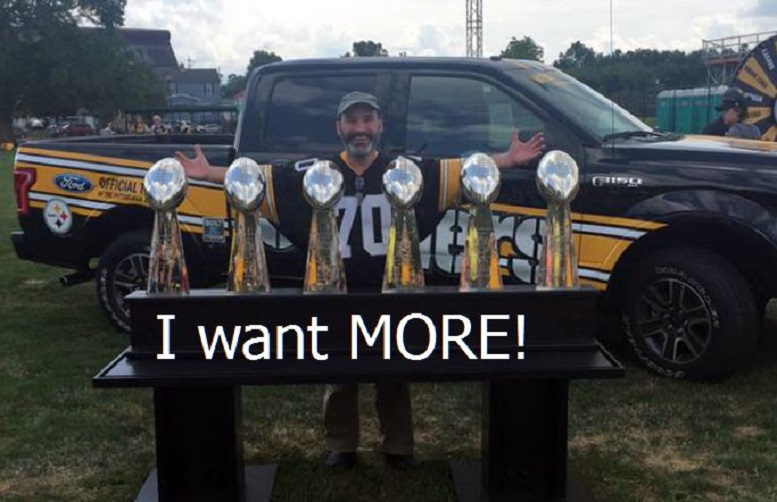 Getting more and more mentally prepared for the Pittsburgh Steelers 2017 season. Friday Night under the Lights was a nice way to watch the Steelers practice despite a delay due to lightning. Steelers Nation was out in force with a crowd of over 10,000 announced despite the weather.

Met some awesome folks including a brother and sister who drove seven hours up from Charlotte, North Carolina to visit with their dad and uncle. Both are Steeler fanatics and shared stories from over the years. Check out Matt’s Steelers cave from North Carolina: I judge this to be an above average Steelers fan cave. How about you?

This article is being written on Sunday during the Family Fest at Heinz Field. This average Steelers fan is listening to Steelers Nation Radio and monitoring Steelers Depot 9th Practice Live Blog and Highlights with live coverage from Alex Kozora and Tim Rice photos. The first preseason game against the New York Giants is scheduled to be played in five days. With no less than fifteen players missing tonight’s practice for sundry injuries; will the Steelers have enough players to field a side on Friday?

No worries, most of these injuries are minor and players are likely being held out as a precautionary measure. A lot of fans do not like preseason games; but I am a bit of a contrarian. I’m not so much interested in seeing Ben Roethlisberger connecting with Antonio Brown. We already know what they can do and want them to save it for when it counts. What excites me are the newer players that have a chance to prove themselves.

A preseason game provides an opportunity for players on the roster bubble to set themselves apart on special teams which can’t really be replicated at practice. Then there are the positional battles. How will running backs Knile Davis and Fitzgerald Toussaint stack up against the Giants. Then there is the last defensive line spot. Will Daniel McCullers surprise us all and make some spin moves and angry bull rushes make a couple tackles for losses. Or will L.T. Walton and/or Johnny Maxey show him up at the nose tackle position.

Cornerback will be interesting in terms of who is healthy enough to play – Senquez Golson, Greg Ducre – are you ready for some football? Is Mike Hilton the real deal as a camp darling. A first look at recently signed JaCorey Shepherd. Be nice to see Cameron Sutton back in pads too. As Dave Bryan and David Todd mentioned in a recent Terrible Podcast; there are maybe eight or nine contested roster slots with 15 viable candidates trying to stay on board. Who will earn a seat and who will be shown the door?

I’m not so much concerned about linebackers, offensive linemen or even tight ends. More about seeing if Justin Hunter continues to impress. What about Demarcus Ayers and Eli Rogers. Coby Hamilton needs to really step it up to get into the conversation. That big wrap that Sammie Coates had around his knee makes it look doubtful for him to come off PUP soon. Better not wait; or it might be too late. Even more perverse, I will be anxiously waiting to see Colin Holba snapping the ball. Have not heard his name much and that is a good thing for a long snapper. Hope he can continue to toil in anonymity.

Finally, a favor to ask of the Steelers Depot readership. As an average Steelers fan; I’ve read a few books about the Steelers over the years. I’m a 20th century man so books still hold importance for me. But after a dozen plus moves over the past 42 years, have lost track of a lot of stuff. Just went through my library and only came up with thirteen titles about the Steelers. Please look at the list below and tell me what books you would add to the collection:

Bettis, Jerome, Wojcieshowski, Gene 2007, The Bus: My Life In and Out of a Helmet, Doubleday, New York, NY

I always like to finish with a piece of music. In respect to the two stormy training camps I attended this season; will go all the way back to 1933 and present Stormy Weather by sung by Ethel Waters. I imagine that Art Rooney gave this a listen a few times during the team’s first season since it was a top hit that year. His son Dan who we just lost was just a year old.