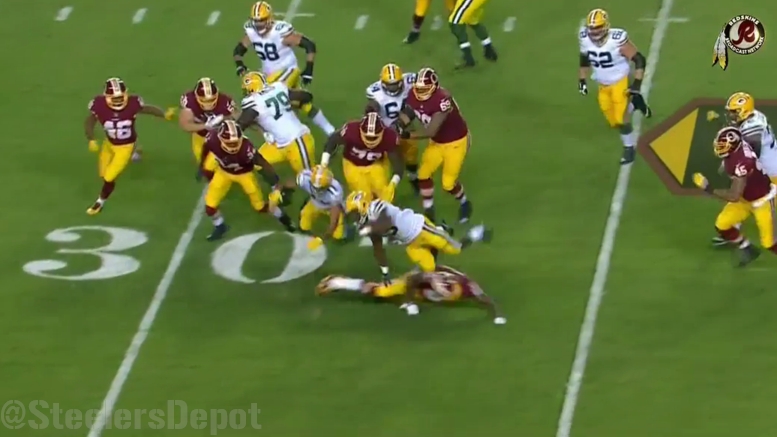 There are a few names of notable players on the Pittsburgh Steelers’ 90-man roster that have yet to participate in the preseason this year, and not due to lack of interest. As I mentioned earlier today, wide receiver Demarcus Ayers would be one of them, but he does not stand alone in this category.

No doubt one big name that the coaching staff is looking forward to seeing during Thursday’s game would be the newest member of the team—actually the second-newest—cornerback Dashaun Phillips, whom they acquired late last week via a player-for-play trade with Washington between those unlikely to make their respective rosters.

This is the third consecutive season in which the team has acquired a cornerback during the preseason via trade, thought with this acquisition, they have given up the least amount of value, only trading away a fourth-string center whom they just recently acquired.

Phillips has played in 11 games over the course of the past two seasons, starting the first two games of the 2016 season as the slot cornerback. The Steelers’ first game of the season came in Washington, so the coaching staff already got a look at him, and was on their radar, so they moved when he became available.

Despite the fact that he was acquired in advance of Saturday’s game, he was not prepared to play just yet, and as far as we can tell, he did not log any time in the contest. But it would not be surprising if he plays extensively against the Panthers on Thursday.

It is unclear exactly how the front office and coaching staff views Phillips relative to the rest of the cornerback depth, but it is worth noting that he has a lot more experience playing in the slot at the NFL level than their first-year and rookie options, Mike Hilton and Cameron Sutton.

I don’t know that getting a lot of playing time would even be an indicator that they are seriously considering him for the roster, but it can’t be dismissed. In addition to having experience on defense, he is also an active contributor on special teams, so he could serve in that role even if he does not otherwise get on the field.

With such a small window to get a look at him, his late inclusion into the discussion is making things more unpredictable. Many of us have already been coming around to the idea of the Steelers attempting to carry seven cornerbacks, and while his acquisition was not a high-profile move, it strengthens that idea.

Players such as Hilton and Brian Allen would seem to be the most likely to be threatened by this move, but the good news is that all three of them would be eligible to be stashed on the practice squad. However, if they carry seven cornerbacks on the 53-man roster, they may well not use another spot at the position there.