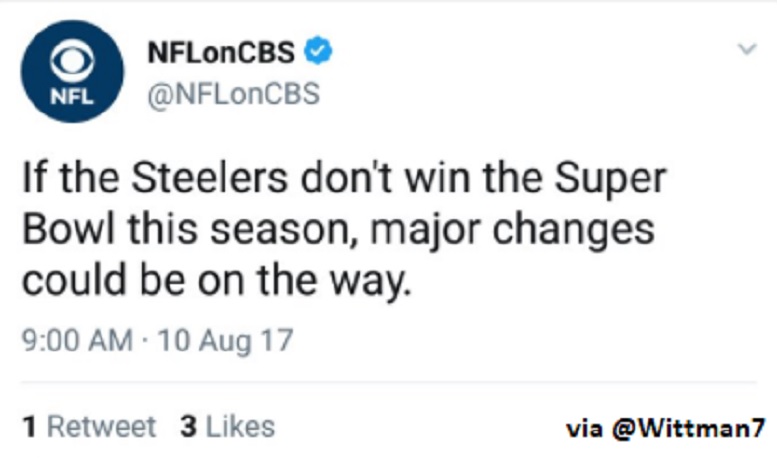 CBS Sports has covered the NFL for a long, long, long, long time and that includes them televising games. Additionally, their Twitter account dedicated to covering the league, @NFLonCBS, currently has over 322,000 followers. Thursday morning, someone who has access to that Twitter account tweeted out that “major changes could be in store” for the Pittsburgh Steelers if they don’t win the Super Bowl this season.

That tweet, which was quickly screen-captured by @Wittman7, was quickly deleted, but not before Steelers PR man Burt Lauten noticed it as well and retweeted it along with a reply of, “Interesting.”

We’ll see if the account ultimately claims hacking in the coming hours. If it doesn’t, perhaps the statement about the Steelers was intended to be a direct message to someone else. The account, however, has since tweeted out a story about Steelers running back Le’Veon Bell.

While the Steelers are certainly expected to be a strong Super Bowl contender once again this year, it’s hard to imagine that “major changes could be on the way” should they ultimately fail to secure their seventh Lombardi Trophy. For starters, the Steelers just signed head coach Mike Tomlin to a new contract extension and it’s speculated by many close to the team that general manager Kevin Colbert will receive one as well before the regular season gets underway.

The Steelers have long been one of the most-stable franchises in the NFL and thus “major changes” really isn’t part of their history or vernacular.