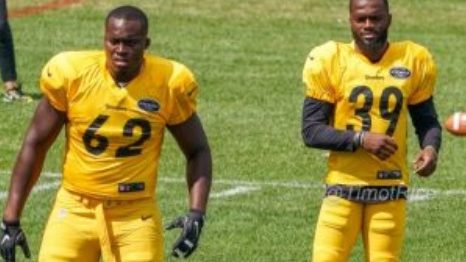 It just so happened that on the same day I made my 53-man roster prediction that included him on the 10-man practice squad, Alex Kozora yesterday also wrote an article in which he gave his opinion that undrafted rookie free agent defensive end Francis Kallon could potentially be worth a spot there.

Not because he looks like he is going to be a quality defensive end. He has not really looked that at all, for the moment. In fact, Alex wrote that he has been barely getting any reps at all in practice, which would potentially make it rather confusing as to why he would be given a spot.

It has to do with his raw athleticism, and Alex used an example of the fact that the Steelers were comfortable enough in that regard to even allow him to serve on the kick coverage unit during the preseason opener against the Giants. You are not going to see a lot of 3-4 defensive linemen serve on that unit, but Kallon has that sort of athletic trait, at least to get a look in the preseason.

I talked about him earlier, last month, and his backstory is important. He is the son of immigrants from Sierra Leone and grew up in England. His family came to the United States when he was already in high school. The only reason that he got into football is because the coach saw him and demanded that he try out.

He is a player who probably doesn’t really understand much about what he is doing, or about what he is asked to do. Even in college, he played very little. He is about as raw a prospect as they come, unless they didn’t play any football at all.

Kallon is a guy who needs to learn the game, and they have shown a willingness to give such players a year of seasoning on the practice squad to see if they can manage to pick some things up. It will be interesting to see if they feel that way about him.