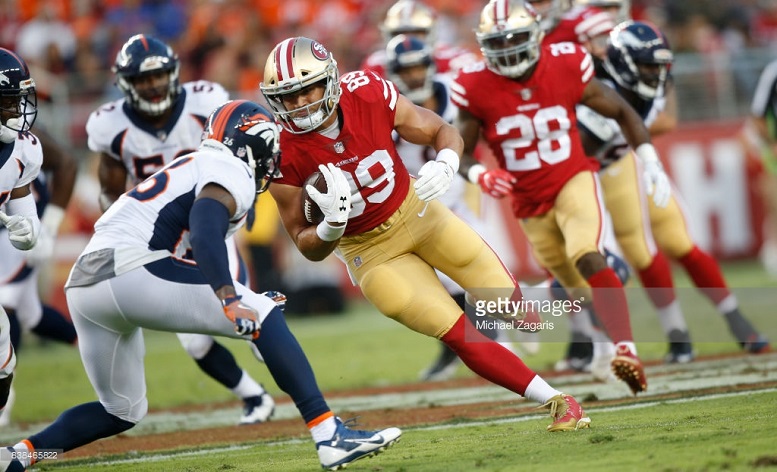 The Pittsburgh Steelers acquired tight end Vance McDonald via a trade with the San Francisco 49ers Tuesday morning and not long after that deal was made, head coach Mike Tomlin talked about his newest player during his weekly press conference.

“He’s an NFL-capable tight end and another guy to add to that mix,” Tomlin said of McDonald. “Some competition there [at the position]. We’ll quickly get him up to speed as soon as we get him here and proceed with the process of acclimating him not only to what to do, but how we go about our business here. We have some familiarity with him. We studied him when he came out in the draft so where excited about that addition.”

Tomlin was asked if he remembers evaluating McDonald when he came out of Rice several years ago and if he thinks he has become the player he thought he would.

“I don’t necessarily remember an evaluation grade,” Tomlin said. “I remember those that I like and I liked him. Had some insight regarding him. One of his coaches at Rice would come up here [Pittsburgh] in the spring and spend time with us during OTAs and exchange some football knowledge. So, felt like we had some insight in terms of who he was when he was coming out of school.”

Tomlin was asked if there are some specific traits that McDonald possesses that will translate well to the Steelers offense.

“I don’t want to have any preconceived notions, to be quite honest with you,” Tomlin replied. “We evaluated him in a certain way coming out in the draft. I’m sure he’s evolved in a lot of ways. I’m also hesitant to draw conclusions about what someone’s capable of being in our environment based on what they were in another environment.

“I’m excited about giving him an opportunity to show his skill set and maybe learn some new ones here. We’re always presently surprised when we go in with that mentality.”

Tomlin also was asked later what he feels the tight end group is currently missing that led to the team ultimately deciding to trade for McDonald.

“The guys hadn’t been consistently varsity enough for our comfort,” Tomlin said. “It’s as black and white as that. They’ve had some moments positively and have some moments negatively. So, we were in the market for a guy that was NFL-capable and McDonald is that. We’re not going to anoint him in any way.

“We’re going to put him in uniform like the rest of them and just continue to allow them to sort themselves out. It’s reasonable to expect the guys that are here to respond positively in the right way to his presence and elevate their play. The end result is that we’re going to get better play and more competitive play at the position and that’s what we desire.”