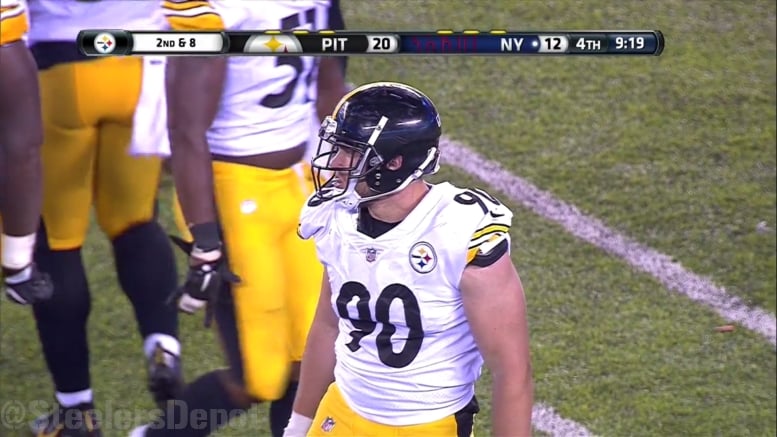 I don’t know about you, but one of the most interesting things that I took away from the debut performance of Pittsburgh Steelers rookie outside linebacker T.J. Watt was just how extensively he played on the left side of the defense. And it leads me to wonder what their plans are for him this season.

And how that will affect others as well.

Now, the long-term plan obviously seems to be for the first-round draft pick to take over for James Harrison as the blindside pass rusher on the right side of the defense. With the 39-year-old mostly in sweats so far, Watt has been given plenty of time to run there, as well.

But he spent seemingly the majority of Friday’s game coming off the left side, and this was not simply because the Steelers were shorthanded at outside linebacker for that game. The only others dressed and able to play were Arthur Moats and Farrington Huguenin, but Moats has extensive experience playing on both sides, and Huguenin also played on both sides.

It’s almost as though the Steelers are trying to get a long look at Watt coming off both sides of the defense, like that is their plan for this season. And heading into the game, I don’t think that anybody on the outside was really contemplating that.

Perhaps the rookie is simply forcing the Steelers’ hands because of his rapid acceleration and his strong physical conditioning. As long as he continues to perform, the team is going to have to get him snaps, and he may not be able to get as much as he demands rotating just with Harrison on the right side.

Bud Dupree is not going to play every snap, but many have assumed that he is going to play the vast majority of them, over 90 percent. Perhaps that is still the plan.

But maybe the plan is for Watt to get the leftovers, so that the Steelers are utilizing a three-man rotation at the outside linebacker position, rather than four. This would be bad news for Anthony Chickillo and Arthur Moats, or Keion Adams, depending on who makes the roster, as there will be nothing left for them.

This is an awful lot to read into one preseason game, however, so I will be very curious to get a glimpse at what Watt’s workload is going to look like over the course of the rest of the preseason, especially when Dupree gets back on the field, to see if he continues to take more than a random snap on the left side, or if it really was about short lines and just wanting to see what it would look like.