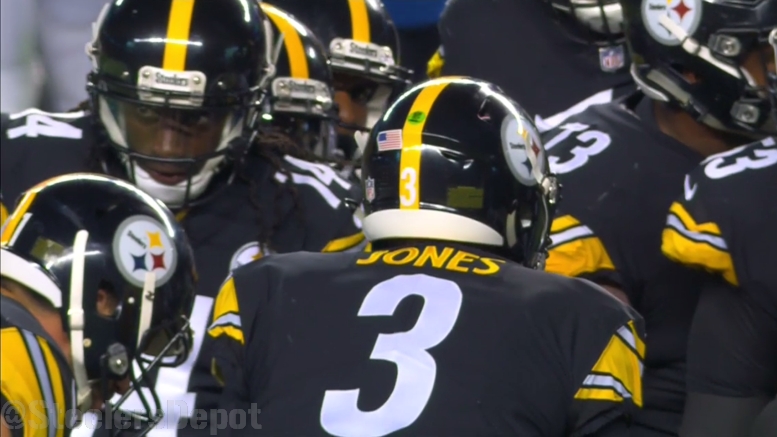 A surprising number of players, now that I think about it, made their preseason debut last night for the Pittsburgh Steelers, including range of those who simply had their first games postponed due to injury. One of them was fifth-year quarterback Landry Jones, who played most of the contest last night after Ben Roethlisberger’s exit.

In all, the veteran’s backup threw 31 passes on the night, completing 21 of them for 163 yards. He threw one very nice touchdown pass, and a late interception in the red zone, targeting a rookie wide receiver with whom there appeared to be a communication lapse, as he stopped his route.

It was neither a very good nor very bad showing for the former fourth-round draft pick, whom the Steelers intend to see in a reserve role presumably by next year, but if this preseason schedule has made anything clear, it is that rookie fourth-round quarterback Joshua Dobbs is by no means prepared to handle the responsibilities of a game day backup.

Jones played nearly three quarters’ worth of action, checking in three plays into the second quarter and only coming out with a few minutes left in the fourth—enough to leave one to wonder why they did not simply let the quarterback finish out the game, considering how close he came to authoring a comeback.

Really, though, we saw last night more or less what we have been seeing from him for the past couple of years now. He has a good handle on the offense and runs it well, pre-snap. He is capable of making a lot of impressive throws, as well, though they do not come consistently enough. But he can have lapses in the intermediate range in terms of his accuracy, and sometimes has issues putting the ball in the optimal place for a receiver to make a play after the catch.

Of course, it’s not as though any quarterback does that consistently. One of Antonio Brown’s two catches early on in the game came on a tough snare on a pass that was thrown behind him on a drag route from Roethlisberger. It happens.

He did show some rust, at times. Early in his playing time, he took a sack from a safety blitz for a loss of eight yards despite the defense declaring it before the snap. He should have made an adjustment in response to that, but he failed to.

His long ball was solid, putting a couple of throws in positions where his receivers could make plays, but he didn’t get a lot of help from his counterparts in this area. The screen game, however, ran smoothly under his watch.

Overall, it was a solid performance that probably knocked off some rust. I would definitely expect him to play a good amount in the preseason finale as well, considering how much time he missed during training camp with an abdominal injury.