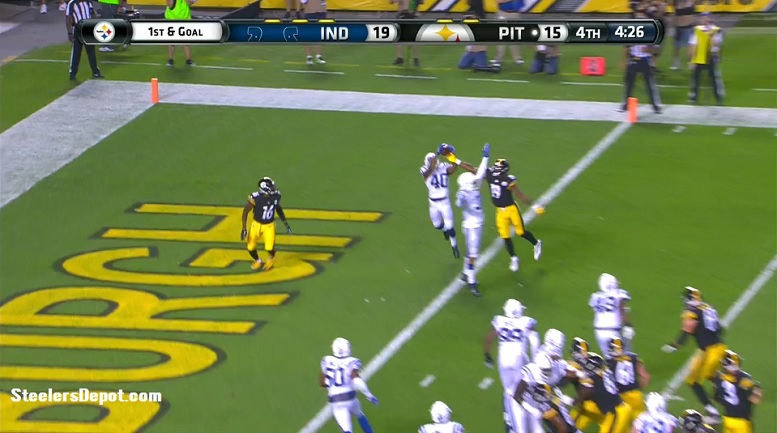 Pittsburgh Steelers quarterback Landry Jones made his preseason debut Saturday night and generally speaking, the backup had a good showing against the Indianapolis Colts. Even so, Jones’ interception in the end zone with 4:28 left in the fourth quarter essentially lost the Steelers the game.

Jones, who completed 21 of his 31 pass attempts in the game for 163 yards and a touchdown, talked on Sunday about how his interception was a throw he probably should have never made.

“That was just dumb by me and impatient,” said Jones, according to Teresa Varley of steelers.com. “That was just stupid. It was a pass all the way. I made a really bad read, and a really bad throw. It sucks it was my last play (of the game).

“That was just a dumb mistake by me. That was a bad read and a bad throw. Those two compounded against each other and he ended up with a pick.”

On the play in question, the Steelers were on the Colts one-yard-line and with a personal grouping that included three wide receivers. JuJu Smith-Schuster and Markus Tucker were lined up on the right side and Jones threw a pass right between them and into the hands of Colts cornerback Chris Milton.

Milton started the play lined up out wide and in man coverage on Smith-Schuster. The play appeared to be designed to include Milton being rubbed off an inbreaking Smith-Schuster but instead, the Steelers rookie wide receiver was cut off by Colts safety Lee Hightower.

To make matters worse, it appeared as though Jones’ follow-through may have been restricted thanks to the oncoming pass rush by Colts outside linebacker Tarell Basham.

After the game was over, Colts head coach Chuck Pagano talked about what his defenders did on the play that resulted in an interception by Milton.

“On the one-yard line, Chris Milton came up with a great interception. We were in man-to-man and the safety… They were working off the pick play and made an unbelievable pinch,” Pagano said.

While Jones hated that his interception happened and especially on his last offensive snap that he played in the game, he’s already looking forward to getting more playing time Thursday night in the Steelers preseason finale against the Carolina Panthers.

Jones, who missed the Steelers first two preseason games with an abdominal injury, will more than likely start that game against the Panthers being as Ben Roethlisberger is expected to sit the contest out.