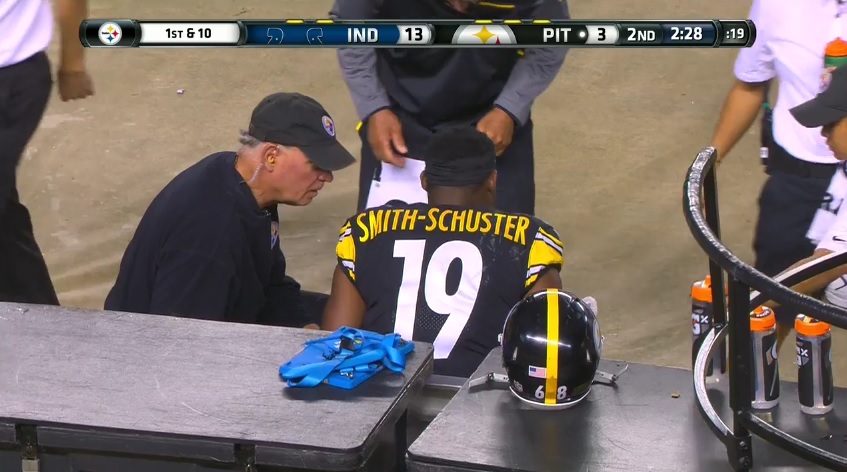 For the fourth time since training camp opened up, JuJu Smith-Schuster left the field with a trainer. It’s hard to imagine a more frustrating, uncontrollable start to camp. But he’s been able to avoid major injury each time and his attitude has helped him quickly bounce back.

“My goal is to try at least get three minutes in the preseason,” the rookie quipped with reporters following the game.

His spirit has been about the only part of his body that hasn’t been injured so far. A timeline of the injuries he’s suffered.

From recovery to next injury, the longest he has lasted is nine days. That’s some terrible luck but the good news is that he’s avoided a long-term absence at every turn. And when finally on the field in the second half of last night’s game, did well, as Matthew Marczi recapped following the game. A big third down conversion, bouncing off two defenders and a toe-dragging catch along the sideline.

“For some guys, it could be up and down,” Smith-Schuster said via Steelers.com. “But then again, you gotta stay positive. It’s all God’s plan. Injuries after injuries, it happens. Nobody is perfect. My mentality is stay positive and help the team out as much as possible.”

This Thursday’s finale will hopefully provide Smith-Schuster with ample opportunity to make up for lost reps. Though the injuries have seemed to diminish his early season outlook, while Eli Rogers continues to play well, there’s certainly still a path to see the field this season and have an impactful role.