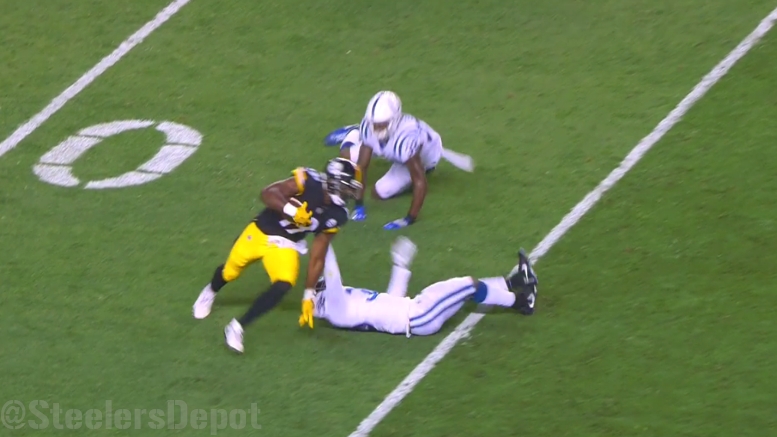 While the Pittsburgh Steelers surely did not exactly get the performance from their starters that they were hoping for tonight, the best news, in hindsight, would seem to be that they escaped what initially appeared to be a big blow, as rookie wide receiver JuJu Smith-Schuster went down with a lower body injury late in the first half.

On the sideline, the medical staff was checking out his left knee, but soon after he was putting weight on it, and he ended up coming back into the game in the second half, even making a few catches. He also drew a pass interference call in the end zone.

After the game, according to Chris Adamski, the Steelers were still checking up on him, noting that the training staff was taking a closer look at his ankle. It is clear that he was injured, but the fact that he was able to keep playing anyway is obviously a great sign.

JuJu getting his left ankle looked at in the locker room

Still, this has been virtually anything but the preseason that Smith-Schuster was hoping to have, as he has been battered and bruised, suffering his fourth injury since training camp opened. It’s unclear what sort of role he is going to have in the offense when the regular season starts because of all of the time that he has had to miss.

The second-round draft pick suffered an ankle injury on the first day of practice. While he healed in time for the first preseason game, he gave himself a concussion diving into bodies while trying to make a tackle early in the game on offense following an interception.

He was quickly in and out of the concussion protocol, fortunately, but during practice the following week, he suffered a bone bruise that held him out of the second preseason game. He gradually returned to practice this past week, enough to suit up tonight, but that just led to yet another injury.

He did catch three passes for 31 yards on the night, with a long of 15 yards, and that included a nice toe-tapping haul early in the second half. As I mentioned previously, he also was able to draw pass interference on a deep target into the end zone.

Unfortunately, he stopped his route on first and goal from the one on the next play, and that helped lead to Landry Jones tossing an interception, the inability to score a touchdown at that time in all likelihood resulting in the Steelers losing the game.