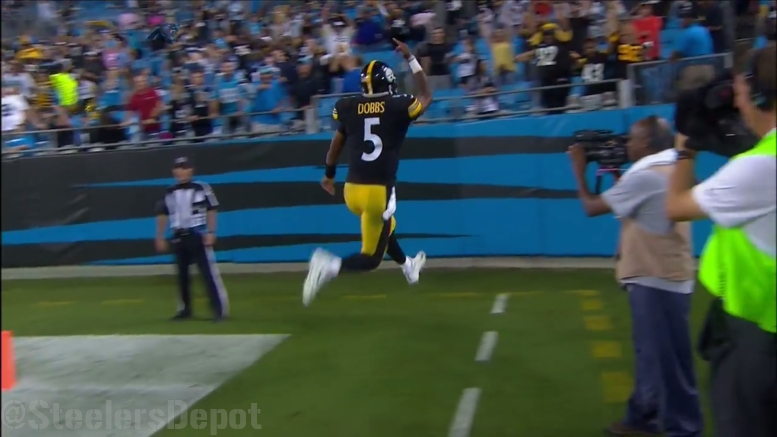 While Pittsburgh Steelers rookie quarterback Joshua Dobbs may not have had the preseason that he was hoping for, he was certain given ample opportunity, playing by far the most snaps of any. With Landry Jones sitting the first two games, he played deep into the third quarter of both, and he played all but the first two drives of tonight’s game.

Whether it was simply because he was facing a lower level of competition or also because he has been making progress, however, the rookie did look better tonight, and that including leading his team to a game-winning drive that he capped off with a one-yard run on a keeper off the right side with just two seconds remaining.

I don’t think that anybody is about to mistake him for Ben Roethlisberger, but Dobbs clearly looked better tonight than he has. Even his numbers are much better, completing 16 of 23 passes (nearly 70 percent for 212 yards (9.2 yards per pass attempt) and a touchdown pass.

That pass was on an early throw, a lovely deep ball that he delivered for the outstretched hands of Justin Hunter, who took it to the house for 58 yards. It was Dobbs’ second and final touchdown pass of the preseason, and the first game with extended work in which he did not throw an interception.

There were a number of times in which he was able to make good use of his speed and mobility in order to escape pressure or to execute bootlegs, but the results after that were mixed. He has a tendency to settle for a scramble of short yardage rather than look down the field. He has even scrambled out of bounds for lost yardage a couple of times (though not in this game) rather than throwing the ball away.

These are all things that can be developed and improved upon with time and coaching. What the Steelers must also hope for is that they can improve his accuracy, because he also had those issues once again tonight, overthrowing his targets both short and intermediate passes.

His future is very much yet to be determined, but it is good that he was able to cap off the preseason of his rookie year on a high note, leading the team to a game-winning drive, even if the end result ultimately does not mean anything. Showing well, no matter the level of competition, is the first step.

I will say that it was surprising Jones did not see more work. He did play all but three series in the third preseason game, with many starters still out there, but he only played two drives in this one, and didn’t get any work in the first two due to injury.