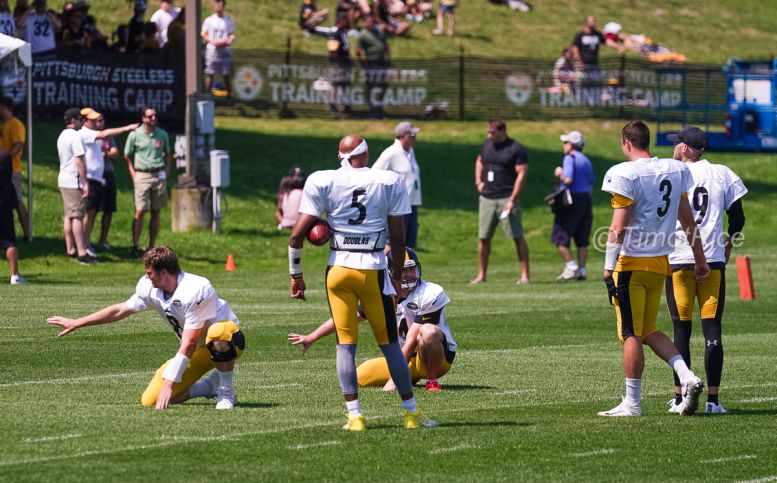 It’s not too often you get to hear about a player’s psyche and routine. So when Josh Dobbs penned an article for KDKA about how he’s prepared for camp, it was something worth checking out.

In a really interesting read you should check out via KDKA, Dobs hones in on two areas he wanted to work on before training camp began. Establishing a routine and getting in great physical shape.

“I planned my schedule to do basically a week of on the field and weight training workouts followed by a week of more quarterback specific drills. That was my first goal after I got drafted; to create a routine and regimen that would allow me to be ready to go once camp started.”

Dobbs references the increase in free time the NFL provides compared to college. His slate is wiped clean of classes and for him, some of the most difficult courses you can take. For some, it can lead to bad habits; a poor diet, hanging out with the wrong crowd, losing focus on football. But Dobbs says he worked hard to create a routine he could lean on during the season.

Conditioning was another high priority.

“Each day I go for a run in the mornings as a warmup and then, during the field sessions, I go high-tempo again, trying to run and stay moving from drill-to-drill. The reason I did that is because I feel that, especially as a quarterback, you have to be able to communicate, talk, process information whether you’re completely rested or just ran 50 yards and have to go to the next play.”

It’s an incredibly bright idea to train being winded, as funny as that sounds. Being able to communicate and play the same way no matter what occurred the play before.

Though Dobbs had a tough start to camp, a difficult first two days, he shined during Monday’s practice. By my charting, if you remove the two passes he threw which resulted in drops, he went 12/14 during team sessions. A rookie season is a long journey full of peaks and valleys but his mindset and attitude makes for a promising rest of the preseason. Quarterbacks elsewhere in the league, like Top 5 pick Mitchell Trubisky, are just having trouble with the quarterback/center exchange.

Like I said, the whole article is worth checking out. Tons more info Dobbs dives into. Don’t want to give everything away here. Here’s the link again if you don’t feel like scrolling back to the top.