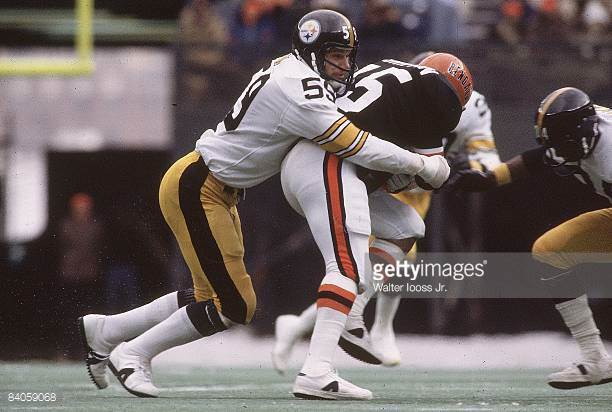 Bringing you another Pittsburgh Steelers’ interview courtesy of our good friend Ron Lippock of the Pittsburgh Sports Daily Bulletin. Today, Ron talks to all-time great Jack Ham. They discuss what Ham’s busy life post-football, his thoughts on making marijuana legal in the NFL and a great story on facing Earl Campbell.

First, you’re a busy guy, tell me about the various things you have going on right now.

The first thing is my energy business – we ship coal to utilities and export them from West Virginia. But I’m now in the Agro-Med business – we have obtained a license for growing medical cannabis and are constructing greenhouses in Pennsylvania. We were one of twelve companies to be issues licenses by the state and have to have them up and running by the end of the year. So that’s obviously on the frontburner… And I’m still doing the broadcasts for Penn State – I’m staying busy…

And you left out the Johnstown Tomahawks!

Considering that the NFL just stated they’re looking to research using marijuana as a medical alternative pain management option for players, your timing is perfect. What are your thoughts on this direction?

Well – as you said the key is research. We’re not talking about recreational use – it’s not like Woodstock in the 60’s, This is for medical use. Considering the rise of opiate painkillers and they’re ruing they’re ugly head now, alternatives are important to research to see if there are other avenues out there. My wife is in the sciences – the education and research is a positive thing to do. You have to keep an open mind about it.

Is the NFL doing enough for the players in need from your perspective?

Especially for players in my era – they don’t want to be on painkillers. People always point to the NFL for blame, but more knowledge is needed on the concussion side. Concussions in my day – it was just like getting dinged. You just went back into the game. We didn’t know. It’s different now. There’s more research on everything – helmets, nutrition…all those things. There’s more safety now for players.

I just spoke to former Steelers lineman Lonnie Palelei who brought up the point about the lack of help for players who aren’t vested – and college players. Thoughts on that?

If another avenue is added to the list of painkillers that can help them, let’s find that. I’m sure ex-players would like alternatives – maybe they can be part of a pilot study. Research and knowledge – they need to bring these things to the table. It will take time – but we’re talking purely on the medical side – we need to explore options.

So turning the page a bit – tell us a bit about being drafted by the Steelers – what were your thoughts about being selected then by Pittsburgh?

Well I was in Johnstown the day before the draft – the New York Giants called me and said they’d take me number one the next day. San Diego called as well. As a college guy I was naive enough to believe them. The Steelers never did call. Coming from Johnstown and going to school at Penn State, I thought the NFL would give me the opportunity to experience other parts of the country.

But the luck of the draw had the Steelers taking me n the second round. To be candid it was disappointing to stay local in the area. And the Steelers were not a good team then – they had a reputation as a tough team but one that didn’t have a lot of talent and lost a lot of games late. In retrospect, it couldn’t have worked out any better. I remember playing in the college All-Star game versus the Super Bowl champions. Players were giving me my condolences – telling me how sorry they were that I was going to Pittsburgh. But it turned out great – they had a great draft that year and the ’74 draft took them over the top.

As a rookie – did anyone really help mentor you the most – and how?

Oh yeah – I was lucky that on the other side of the field there was Andy Russell. I was able to get on the job training watching him. He was a pure tactician – played with discipline. I learned a lot from him as he helped my career so much as a rookie. I was like an intern – he was crucial to my career.

Why do you think about why that culture of veterans helping rookies, even as some were about to take their jobs, was so strong in Pittsburgh?

Well, it’s hard for me to say since I spent my entire career in Pittsburgh. Andy helped me and the other veterans did as well, even though some had a job I may have taken away from them. They were true professionals – and if you saw potential in a player to be a quality player you just did that to make the team better. There weren’t players who wouldn’t say a word to me. Professionals don’t shun other players – they want to make their football team better.

Give us a good story about your time in Pittsburgh.

We played the Oilers two years in a row – the first year we had horrible rain…sleet…it was just awfully and cold. Houston played in the Astrodome – they were indoors all the time. It was a horrible matchup – we won 34-5.

Earl Campbell – I was unlucky to have to play against him two times a year in the division as it is. But we had to play him three times a year those two years. That was a lot of Earl Campbell. Well, the the first game, there was a minute left to go. They ran a toss to Campbell on the other wide and I just sort of jogged figuring someone else would make the play. Well, he reverses field and comes my direction and slams into me, He shattered the facemask off of my helmet. I could have lost an eye. I said to Earl as we were both on the ground, “It’s 34-5 Earl!”He just looked at me and said “I go one-hundred miles an hour every play. I don’t care what the score is.” We were one minute away from the Super Bowl.

I just gathered the pieces of my helmet and let my backup fill in for the rest of the game. Earl was a great competitor – a career ender for some players. That was the legend of Earl Campbell.

Any thoughts on the way the game has changed?

The players really are bigger and faster and stronger. It’s a different game – it’s still a great game. The concussion stuff – that’s the evolution of the game. You have to instill those changes throughout the game. But I still love the game.

Lastly, how did you manage that transition from the NFL to a post-NFL career?

Well, back then guys had to have other careers. Andy Russell had his investment business – we just didn’t make the money they do today. I even worry about today’s players though – you need challenges in other ways for yourself like the ones the game provided. I played with great guys over my eight-to-nine years. Then you all go different directions and you never have that locker room ccamaraderie. But you have to try and find that in different ways over your post-NFL career.