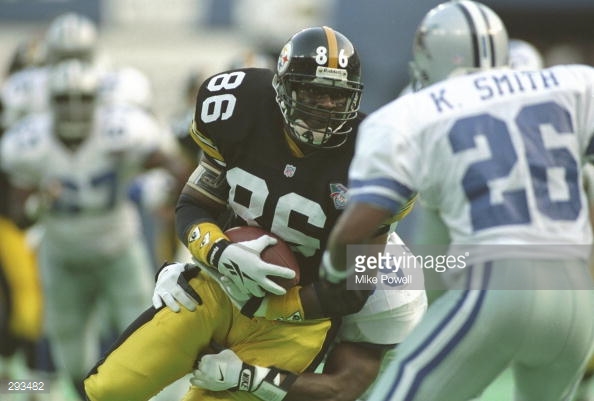 Bringing you another Pittsburgh Steelers’ interview courtesy of our good friend Ron Lippock of the Pittsburgh Sports Daily Bulletin. Today, Bringing you an interview with one of the most athletic tight ends in team history. Eric Green talks to Ron about coming out of a small school, leaving Pittsburgh, and his thoughts on Le’Veon Bell’s contract situation.

First, can you let us know what you’ve been doing with yourself since your time in the NFL?

I was coaching youth football for the past two years but stopped now since my son’s now playing baseball instead of football. I’m following him full-time – following him and his dream. I’m retired now. And I’m giving back to the inner city community – that’s my passion. Seeing kids follow their dreams through athletics and coaching them to succeed.

What coach and coaching lessons really helped inspire you as a coach?

My college coach Sam Rutigliano – he made the total difference in my life.

He showed how player-coach relationships should be. Total honesty – one-hundred percent real. It was the truth – like it or not. And he was positive – he helped show people what they could be if they put in the time and the effort.

As a first round pick, were you surprised to be picked by the Steelers and that early?

Not really. I had one helluva senior year in college. My statistics were overwhelming. My one-on-one workouts, they opened up some eyes. The combine, eyes really opened…the Hula Bowl opened up people’s eyes. It was a progression. Coach Rutligliano came to the team my senior year and told me the first day he met me I’d catch sixty-to-seventy balls. I caught sixty-three. He was a life-changer. I didn’t have those stats all three years combined before. So three weeks before the draft, the Steelers sent their wide receivers coach Dwain Painter to work me out. He threw seventy-to-eighty balls to me and I didn’t drop one. I think that sealed the deal for them.

Was the NFL system complicated, coming from a smaller school like Liberty?

Not for me. In the NFL I was in Joe Walton’s system and there was no more complicated system than his. I was the focal point in his system. I was a bright guy – learning the system like the back of my hand wasn’t a problem. Rutigliano really prepared me for the NFL

Did any of the Steelers players help mentor you most on and off the field?

Did your faith play a big part in how you approached the sport?

We didn’t have much as a kid – but we always went to church! I tell my son, get on your knees, because God is the only one who will lead you. That’s just the background of me. Faith helped me with the temptations of the professional arena.

I’m not sure many people know how versatile you were as a player. You played running back, receiver and tight end as a rookie – what led to that versatility?

One thing is I always considered myself an athlete first. Baseball and basketball were my first sports – football was third. I always had good feet and coordination. Football came easy to me. They believed in my skills – they drafted me for a reason.

Tell me a bit about some of the funnier moments on the team while you were there.

When I first got there – Keith Willis, Terry Long, bless his soul, and trainer Ralph Berlin – the way the communicated, I thought they hated each other, Just the way they said things to each other. As a rookie, I always thought it was the strangest relationship. But man, they loved each other.

Oh – and here’s a good story. The rookies were always in charge of bringing in donuts on Mondays. I held out a lot of my rookie year so I didn’t know the rules. So my first Monday I didn’t bring any donuts. So a player stopped me. Not just any player. Mean Joe Greene stopped me! He asked me where the donuts were. He explained to me the rules and told me to bring them next time, And to bring chocolate cookies for him! Mean Joe Greene was my idol – I was raised as a Steelers fan. Greene was my favorite player. To be around there for my first two years with him was a Godsend.

Talk to me about the financial part of the game. You’re familiar with LeVeon Bell’s franchise tag situation and potential holding out decision. You’ve lived through that as a player – what were your thoughts as you went through that?

Well you’re talking to the right guy – I was the Steelers first franchise player. I went through the same thing as Bell. I was young and immature – I felt the team didn’t give me the ball enough in the championship game. Cowher asked me the next day if I wanted to be a Steeler. I told him no, It was the dumbest mistake of my life, I didn’t think he wanted me. When he first met me he said I was one of his core guys – but he didn’t offer me a contract after that.

Did your teammates get angry at you for holding out?

No – I didn’t get anger from any of my teammates. Not one. We were all in the same boat – especially with the Steelers. Everyone except Rod Woodson!

Post-NFL, how hard was the adjustment to your post-NFL life?

I always had my degree. I loved to coach. I coached in NFL Europe for Frankfurt and won a championship with them. I also worked with Mike Tice in Minnesota and the great George O’Leary who hired me at USC as their tight ends coach. Pro football was my passion, but when my knees went out on me I filed for disability.

Looking at the tight end position today in the NFL, what do you think about how the position has changed since you played and how you helped shape that transition?

All that Gronk is doing now, I lined up in those same spots he does now in ’90 and ’91 and had the same success. In my mind I started that stuff but it’s never talked about. But that’s fine – the guys I played with still call me and tell me that all the time. It’s a testament to Joe Walton who trusted me, and to Chuck Noll who trusted him. They believed in me.

Any advice you’d give players today?