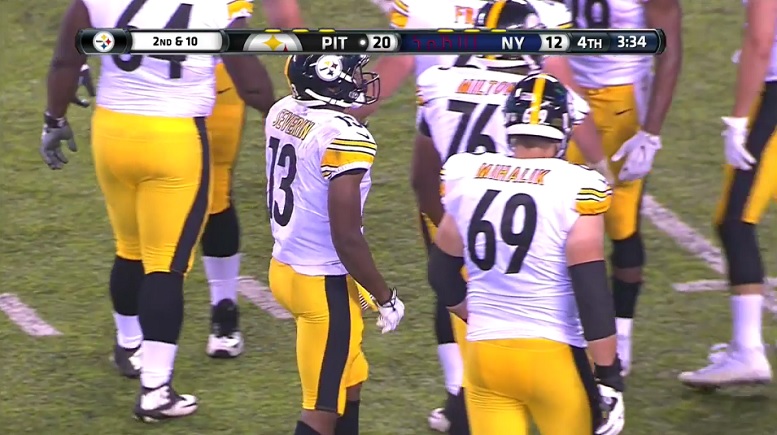 It did not take long for former Pittsburgh Steelers’ wide receiver Canaan Severin to find a new home in the National Football League.  After being released by the Steelers earlier in the week, Severin was signed by the New York Giants on Friday.

The Giants got a firsthand glimpse at Severin’s abilities when they opened their preseason campaign against the Steelers on August 11th. Severin caught two passes for 24 yards in the matchup but also had a couple of drops, which likely played a role in his departure from the Steelers’ organization.

Working his way back to the ball, Severin drops his first pass of the game on a throw that hits him square in the numbers.

Severin’s fortunes went unchanged even with the change at quarterback. With Bart Houston under center, Severin drops another critical pass that hits him in the hands. Executed almost perfectly, the Giants bite on the play action and Severin is able to beat his man to the middle of the field. If Severin is able to hold on to Houston’s pass, there is a significant chance that it is a footrace to the end zone.

With a long list of receivers fighting to make the roster, Severin was more than a longshot to make the Steelers’ 53-man roster, making the decision to waive him an even easier one after his subpar preseason debut.

Despite his subpar performance against his new team, Severin’s addition to the Giants roster comes in good timing for the New York franchise. After waiving wide receivers Keeon Johnson and Kevin Snead due to injuries, the Giants were searching for wide receivers to fill out their preseason roster.

Measuring in at 6’2, Severin will give the Giants adequate height at the wide receiver position.