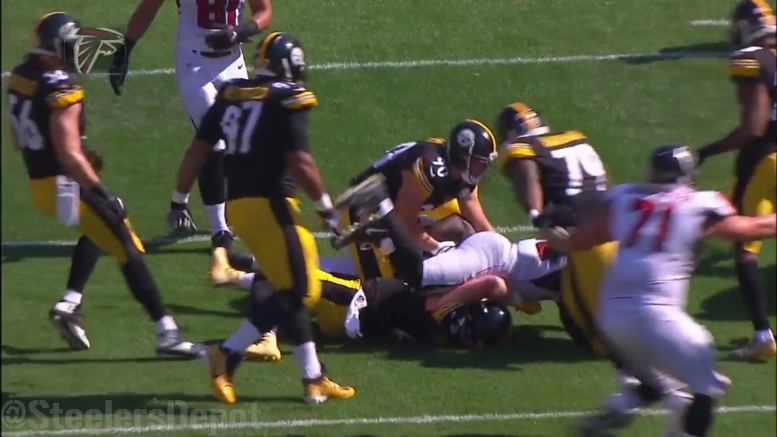 A lot of attention over the summer has been paid to the Pittsburgh Steelers’ rookie first-round draft pick, outside linebacker T.J. Watt, and not for good reason. Though it hasn’t yet been made abundantly clear, it seems as though he is slated to be a starter, or at worst, receive a significant amount of playing time.

The rookie impressed in his preseason debut, albeit partially on the strength of two relatively easy sacks, but seemed to have a more quiet evening the following game against the Falcons. Still, while he may not have generated as much pressure, I thought that he did some good things, particularly against the run.

On first and 10 from near midfield, the Falcons were looking to catch the Steelers on an outside zone run to Watt’s side, but he and the front seven all played it very well. With Sean Davis holding the edge and funneling the play inside, Watt worked to push the left tackle back and got to his outside shoulder to make the tackle on the running back for a loss of a yard.

He continued to execute well against the run, including another run stop later in the first quarter. With Atlanta facing a second and 10, they countered Watt with a tight end, but it didn’t take long for the pedigreed edge defender to stack and shed for a two-yard run. Tyson Alualu was credited with the primary tackle, Watt the assist, but it was largely the latter who made it happen.

As mentioned, the rookie was not nearly as effective in the pass rush as he had been in the first game, but he did find some success. Perhaps his best-looking rep in that regard of the evening came late in the first half on a play that was actually favorable for the Falcons.

Though the quarterback got rid of the ball quickly on a first-and-10 play for an 11-yard gain that set up first and goal, Watt showed excellent bend getting around the right tackle, a move that shows that he has the athletic ability to excel as a pass-rusher as he develops his repertoire.

One of his most endearing qualities is just the consistency of intensity with which he plays. He had a couple of tackles that just consisted of cleaning up plays from the back end, and one of them came two plays after the pass-rush snap above. I felt this was the best example of those plays, and so chose to highlight this run, one-yard gain on second and goal from the nine.

Watt is quite clearly still a developing player, but he shows a lot of promise and ability, as well as a propensity for self-correction, and the drive to succeed. His future is bright, but he will have to work for every drop of his success. He seems quite willing to do just that.