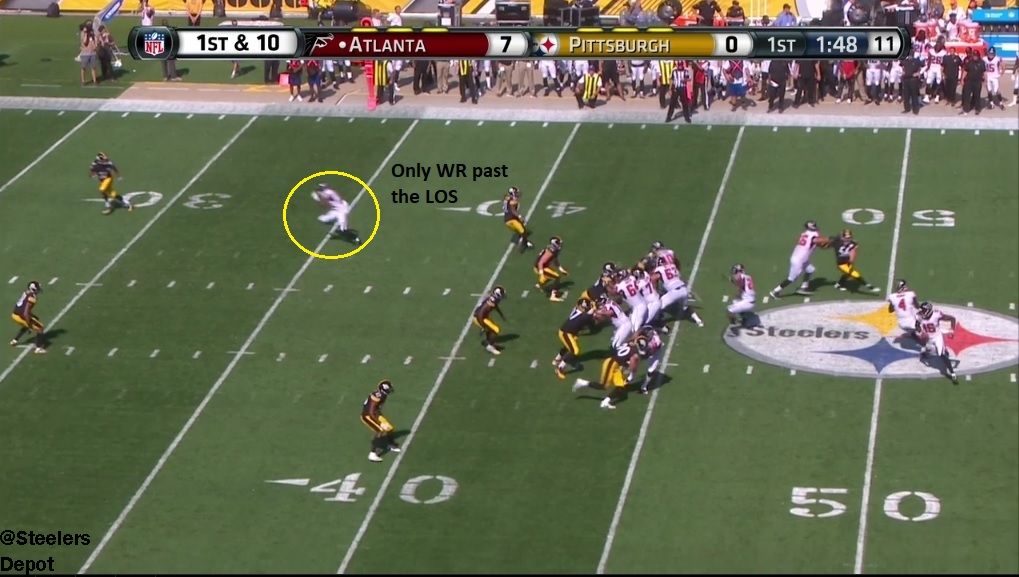 The Pittsburgh Steelers’ pass defense felt like swiss cheese yesterday. Holes over the middle and they stunk pretty bad. Film room sessions in the preseason can be a challenge with poor camera angles, especially looking at secondary play, but with as bad as things got, you don’t really need the All-22.

Atlanta knew exactly where to attack the Steelers’ defense: over the middle. Let’s take a look.

Think this first play is the most egregious example. Playaction, no other WR is even running past the LOS, the other WR faking the end around, and yet the WR makes a generally uncontested catch, Ross Cockrell and Robert Golden arriving late.

There was the same issue the play before. 3rd and 8, a down Mike Tomlin harped on as an issue coming out of the game. Fire Zone blitz, Artie Burns coming on a Cat (corner) blitz from the right side. Doesn’t get home. Robert Golden, rolling down to replace Burns while Will Gay rotates as the deep 1/2 safety. But the receiver runs a ten yard dig to the MOF. Both linebackers expand with their flat routes, leaving no one over the middle.

And earlier in the game, a 1st in 10 with another dig complete over the middle. Golden can’t close on the ball in time to play the catch point, only able to make the tackle.

This game shows the impact of not having Mike Mitchell. Without him, there isn’t that fear of going over the middle, and Golden doesn’t drive downhill with the impact Mitchell does. I’m not guaranteeing Mitchell doesn’t make those plays but I like his odds much more. It’s what sent Golden to the bench. He’s solid, he’s steady, and a sure tackler, but doesn’t provide the impact he has to from his safety spot. That’s why he’s going back to the bench when Mitchell is healthy.

As Tomlin was quick to point out, the issue can always be two-fold. Rush and cover. It’s hard to even pinpoint exact issues in these examples. But the Steelers gave up some of the easiest plays you can give a QB yesterday. And they didn’t have the personnel to make up for schematic weakness.