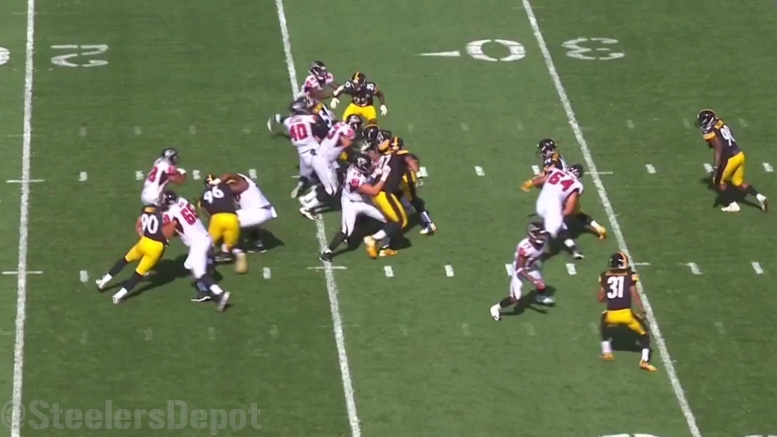 When the Pittsburgh Steelers first drafted L.T. Walton in the sixth round of the 2015 NFL Draft, I don’t know that he would have fit the bill for what they were looking for at the time at the nose tackle position. Two years on, however, it is clear that he is a better fit.

While it may not be a move on a full-time basis—as a reserve, he will naturally be expected to be flexible—the defensive lineman has shown that he can handle the nose tackle position, increasing his value in doing so. He got some extended snaps on Sunday against the Falcons from which we can evaluate his progress.

The first play here comes midway through the second quarter with the Steelers showing their 4-3 over front, Walton as the tilted nose. He did a nice job on his play of getting initial push against the center, which forced the runner to reroute and slow down. He ended up getting spun around, but the initial pressure helped produce this play.

On an early run in the third quarter, the Falcons tried to execute out of a zone scheme, but quick pressure and penetration blew up the whole thing. As the center dropped back, Walton was already on him and forced him to occupy the defensive tackle. The running back tried to cut back, but they then the defense had run up on him and he was tackled after a two-yard gain and set up a third and 14.

Later on the in the quarter, he got to play as a true nose tackle in your standard 3-4 defensive front, and he looked like it—that is, more like Chris Hoke than Casey Hampton. Altanta tried to sweep right but Walton stayed with the center laterally while gaining penetration. The whole defense played it very well, and he and Johnny Maxey made the tackle together for no gain.

His single-most impressive rep of the evening came later in the third quarter, this time out of the nickel front. As the center tried to turn and work to his left, Walton buried him back into the backfield, angling the lineman against his running back and using him as a guide point to scrape away and make the tackle for no gain on second and seven.

A lot of people wondered if Walton would even make the 53-man roster during his rookie season, but as he enters year three, he figures to serve as critical depth. While he may not be the top reserve—that would be Tyson Alualu—he still figures to get a regular helmet on game day and some playing time to go along with it.