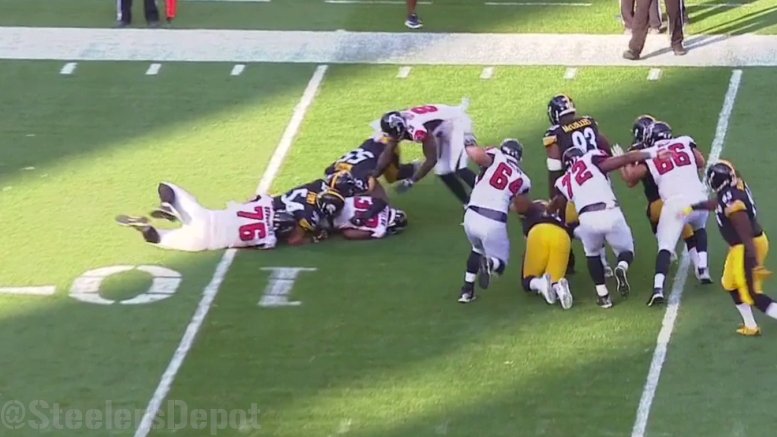 If you have been following my 53-man roster predictions through the summer, you will have noticed a subtle but significant change. Entering training camp, I had the Pittsburgh Steelers carrying four inside linebackers, with Steven Johnson being the last. That quickly changed, adding L.J. Fort as a fifth. But now I see Fort as being the fourth and final player at the position, and that has a lot to do with his work on Sunday against the Falcons.

Coming in with the second-team defense, the veteran defender contributed in all areas, including run support, coverage, and rushing the passer. He also showed that he is clearly the most athletic of the group outside of starter Ryan Shazier, and perhaps the best-equipped to fill his shoes due to that fact.

Coming in late in the second quarter, his first play of note came on second and nine. Dropping into a shallow zone, with Jordan Dangerfield in the box covering the tight end, Fort was quick to react and make the tackle as Matt Simms split the zone between the two, limiting the Falcons to five yards. An incompletion on third down resulted in a punt. He showed similar zone awareness relative to down and distance in the fourth quarter.

Another coverage play of note came midway through the third quarter. Showing blitz at the snap up at the line of scrimmage, he dropped 10 yards and nearly got a tip on an overthrown ball. Perhaps, had the pass actually been on-target, he may have even had a chance at an interception.

That was a third-down play that led directly to a punt. The Steelers’ ensuing offensive drive was short, however, so Fort was back out there in less than two minutes, and he began to go to work against the run. Following a five-yard penalty, the Falcons faced a first and 15 from their own nine. Fort was able to beat the second-level block of the left tackle as he got to the hole to make the stop after a one-yard gain.

Later, in the fourth quarter, he had arguably his most impressive play of the night, dropping the running back for a loss of three on second and four. Once again, he was able to get around the left tackle, but this time he did so around the defensive right edge, through the C gap, penetrating behind the line of scrimmage.

Finally, very late in the game, the Steelers sent him on a blitz off the left edge of the defense. With the running back ignoring him shooting to the flat for the pass, Fort read the quarterback and timed his jump, swatting the ball down at the line.

Though he is only entering his third season, Fort has been around since 2012. He has bounced around for years now, but he may have finally found a home with the Steelers. He spent most of 2015 on their practice squad, and then most of last season on the 53-man roster. I think he is likely to repeat that feat in 2017.