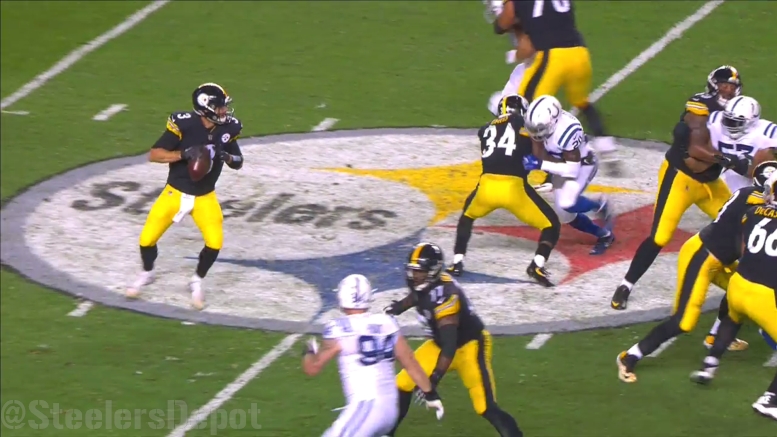 For the Pittsburgh Steelers, Knile Davis may be the Jesse James of the running back group: he does a little bit of everything, but none of it exceptionally. Except in his case, he’s not being viewed as the starter. As unexciting as his prospect of being on the roster is, I have a feeling he is going to be their third back, as I said earlier this week, but I wouldn’t object to the alternatives.

His extensive work through the first half of their last preseason game was by design, of course, and I think he ultimately passed the coaches’ test. It started out with a couple of nice runs that he was able to break to the outside with the speed that he has supposedly lost, picking up chunks of 10 and 11 yards.

In fact, early on the first drive it was nearly all Davis all the time, seeing multiple carries and targets. On one early reception off a screen pass, he sidestepped one defender and spun out of another before a group of Colts finally stopped him after nine yards.

Unfortunately, following his early success being able to get to the edge on runs, the veteran seemed to become enamored with the idea and kept trying to bounce his carries to the outside while passing up more immediate opportunities.

On this second drive, he turned down a small inside crease on second and one and ended up losing four yards. You can see Ben Roethlisberger’s displeasure while the play was still running, literally pointing up the field as if to say, ‘you’re going the wrong way’.

We saw Davis do this a couple of times in the game, a trend similar to his poor decisions to take kicks out of the end zone. I suspect that this was at least partly driven to his feeling the pressure of a roster battle, and attempting to make plays, so I can excuse him for that, but he can’t do that in the regular season. He needs to make smarter decisions.

One other value that he does have is as a pass protector, and we saw that late in the first half. While he got off a couple of nice chips on perimeter defenders, he also stoned a couple of blitzers coming up the gut. This was the best example of that.

As I said above, I’m certainly not enamored with Davis, but I am given the impression that the Steelers are going to carry him. I am open to the possibility of either Terrell Watson or Trey Williams, who still interests me, doing something in the preseason finale to convince the coaches to make an alternative decision.