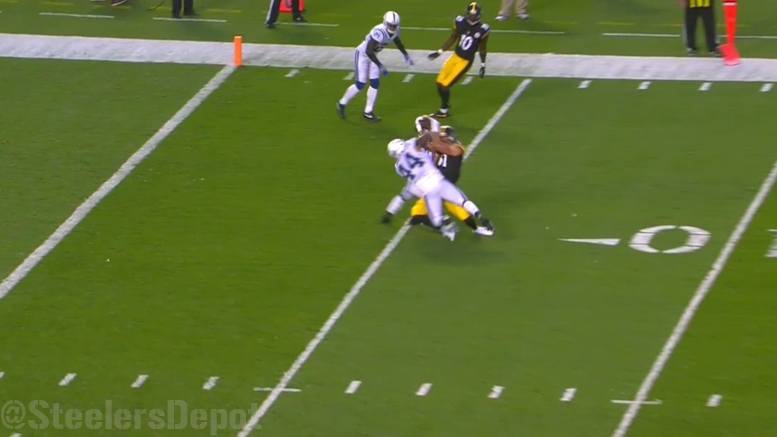 To be honest, it’s not Jesse James’ fault that he is in the position that he is, presumably acting as the Pittsburgh Steelers’ number one tight end. While I have written that I believe the team would be wise to take more of a committee approach, and that James’ talent level is closer to that of a complementary number two tight end, I also don’t want to be portrayed as ‘hating’ on him. He does some good things; I just think he’s asked to play a bigger role than he is capable of filling with aplomb.

While my biggest issue with the tight end is his inability to create yards after the catch—a big-bodied player such as himself should not go down as easily—his inconsistency as a performer blocking has been the most frustrating. He has made some high-profile blocks over his first two seasons that have gotten him attention and have overshadowed his failings in between.

This was not one of those failings however, as on this early pull block, the young third-year tight end showed a good closing pop in order to seal the inside linebacker to the outside, giving the running back a lane off left tackle for a gain of 11.

The drive unfortunately did not end in the manner that he would have cared for, however, as there was some evident miscommunication issues. According to Ed Bouchette, James thought that he was supposed to downblock inside for a run on the play on which Ben Roethlisberger was strip sacked. The initial blame went to Alejandro Villanueva, but it was the tight end who had the wrong assignment, and should have defended the edge player who made the play.

The third-year tight end also had a rather unfortunate game as a receiver. His first target was undercut and defended by the covering linebacker. His second target one play later initially looked to be a fantastic catch going over the defender’s head, but the safety came up and hammered him from behind, jarring the ball loose as he tried to secure it above his frame.

James has at times looked lost in his assignments when asked to block in space along the perimeter. A third-and-11 screen pass to Martavis Bryant early in the second quarter was one of those times as he struggled to locate and select a defender to block, resulting in a three-yard loss on the play.

But he does deserve credit for making a very good, and crucial, reception late in the first half. On third and 12, Landry Jones looked for him over the middle of the field while under duress. The pass was thrown behind the tight end, and the replay shows the effort that went into reeling that one in.

I hope I’m not going to be crucified by James’ fan base, but I just don’t see out of him somebody who needs to be playing 90-plus percent of the team’s snaps over David Johnson and Xavier Grimble.