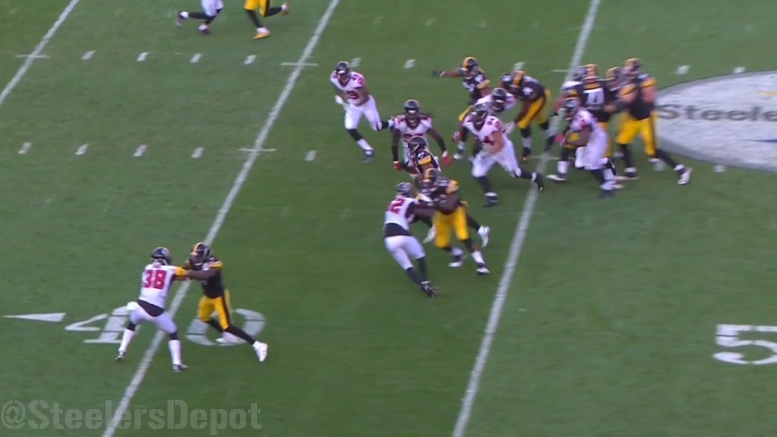 You might have noticed that I was pretty down on Pittsburgh Steelers second-year offensive tackle Jerald Hawkins earlier this week. The former fourth-round pick was coming off what was by all accounts a bad training camp, confirmed by virtually all beat writers, even Bob Labriola, and he had a rough outing against the Giants in the first preseason game.

The second time around was a much better showing, and he got to log quite a bit of time, playing the remainder of the game after Alejandro Villanueva took a seat late in the first half it wasn’t a flawless performance, but it was far better, and clearly showed the potential that was fawned over this spring.

His first rep, however—not so great. I believe this was against the Falcons’ first-round edge rusher, Takkarist McKinley. The rookie nearly drove Hawkins back into his quarterback, but fortunately it was a short pass out of the shotgun on a three-step drop.

It did get better from there. Like, two plays later. He did a much better job against McKinley this time, getting his arms into the rusher’s chest. He worked up the arc a bit, but Hawkins ultimately stymied him.

The LSU product had some nice work in the run game in the second half. Though it was just a two-yard run, Hawkins showed the athleticism and assignment discipline to be able to work to the second level on this play, which got bottled up in front of him. He could have finished this block better though and prevented his man from getting into the tackle late. It looks like the run should have gone off his back side.

Yet another positive example in the run game for Hawkins comes on a poor play for the offense. He did an excellent job here of sticking on his man and mirroring his moves, keeping him entirely out of the play. Of course, the rest of the Falcons defense assured that he didn’t need to be there.

This mid-third-quarter rep in pass protection is a good look here. The rusher’s quick inside dip caught Hawkins leaning inside and thinking he could afford to throw a chip in to help his left guard, but then his adversary bounced outside and got the edge. Still, you do see a bit of agility here that allows him to recover enough to allow the throw to get off, which was accurate. Perhaps this is ultimately a loss, but it shows some positive traits, and is a learning experience.

Finally, the second-year man’s good work in the run game actually yielded a good play. Here James Conner works off the back of his second-level block after an initial inside chip to find a lane for 17 yards.

The selection of pass-protection plays here is not necessarily indicative of his overall performance, which was less adventurous and more successful as these plays might indicate, but I thought these examples show something more to learn from.