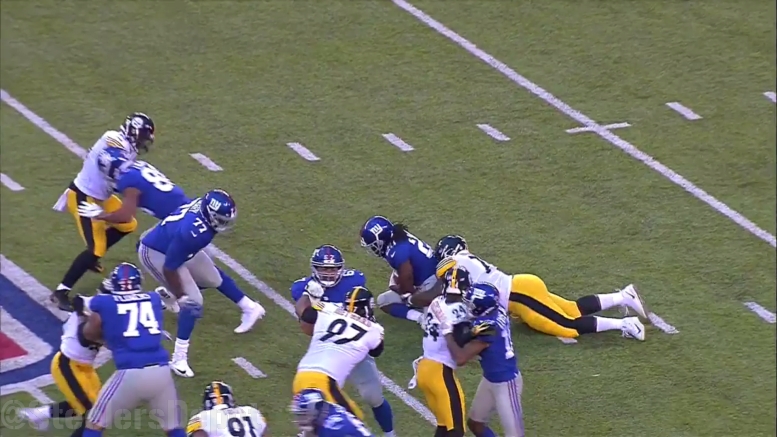 You can tell that football is really back when your daily reading once again consists of articles that are full of gifs, because it means that we finally have some hard evidence to analyze. Today is my first such stab at breaking down some film since the Pittsburgh Steelers’ last game in the 2016 playoffs.

I am talking about Javon Hargrave, the second-year defensive tackle taken in the third round of the 2016 NFL Draft. He was an immediate starter at nose tackle as a rookie—such that nose tackle is a starting job anymore—but played a much bigger role as the season progressed and injuries mounted.

The first play he made came on the second defensive play of the game for the Steelers following a seven-yard run. With the defense playing in their over front, Hargrave lined up over the center. With the Giants’ line shifting left, he used his speed to beat the reach block of the right guard and their rookie tight end, motioning backside, was too slow to reach him. In fact, the two blockers collided with one another as the defensive lineman made an impressive adjustment to bring the ball carrier down for a loss of four.

On the Giants’ third drive, which was accelerated by a turnover, they were in the red zone facing a second and two. This time, he straight up got the better of the center, ripping by him to get into the backfield for another tackle for loss.

Still, New York managed to convert later in the drive, and then faced a fourth and one. They converted on this play as well, though there wasn’t much Hargrave could do on this one, as they ran away from him. The Giants doubled Cameron Heyward and drove him back to open a hole.

Two plays later, the defense responded and helped keep the offense out of the end zone. While Arthur Moats got the sack and the coverage was sound, Hargrave’s pressure up the middle helped guide the quarterback to where the play could be made when he found no outlet to throw to.

It was a good, but not flawless start for the second-year man, who should be an important player on defense for the Steelers this year.