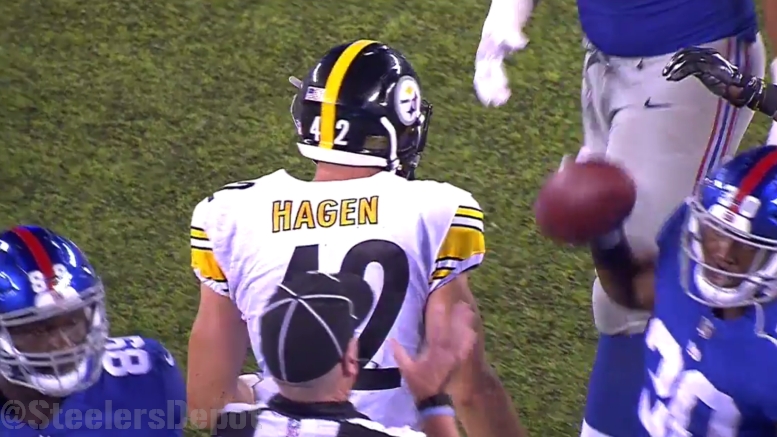 It certainly seemed earlier in the offseason that the Pittsburgh Steelers were rather interested in finding a fifth safety to carry on to the 53-man roster once the regular season begins. It looked as though they might have found that candidate when they added free agent Daimion Stafford late in the proceedings.

As you no doubt know by now, however, Stafford failed to report to training camp and has evidently chosen to retire—or at least is strongly leaning in that direction. But before there was Stafford, there was, and remains, Jacob Hagen, who has been around the block already.

The Liberty University product has spent time with the Steelers during each of the past three offseasons, and lasted throughout last season on the practice squad. There appeared to be some believe that he could potentially emerge for a spot on the 53-man roster this season.

And what better way to judge that than to look at what he does on the field? Unfortunately, the first-year safety did not play a lot, and when he did, as is often the case for safeties, there was little to analyze, but some work during the third quarter could serve to highlight some things.

Very early in the half—in fact, on the second play—the Giants were facing a second and eight. With the Steelers in their 3-4 front, Hagen came up into the box at linebacker depth. While he ultimately was able to come in unblocked, he read the play well and attacked quickly, making the tackle after a one-yard gain.

On the next play, with New York facing a third and seen, Hagen played the role of deep safety, dropping back just before the snap. Though not his sole responsibility, from what we can see from the broadcast footage, the tight end was able to find the zone in front of him. He made a hard tackle but could not jar the ball loose. You can see the linebackers’ reaction to allowing the play to go over their heads, indicating that they should have gotten more depth on their drop.

A bit later in the same quarter, in fact, on the same drive, we did get a shot of the last thing that anybody trying to make the roster wants. The first-year safety missed a tackle in open space that he should have had.

I think that Hagen is probably a longshot to make the 53-man roster unless he starts to shine on special teams, but he does figure to be a prime candidate once again for the 53-man roster. He could be the new Jordan Dangerfield.