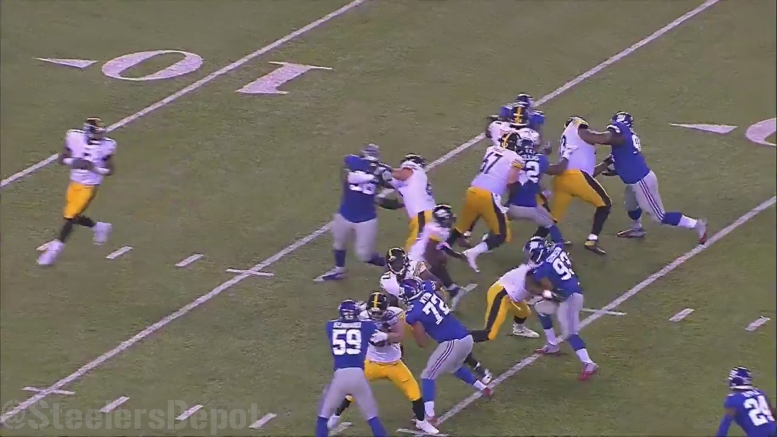 If you are among those who are hoping to see somebody displace veteran David Johnson from the tight end room for the Pittsburgh Steelers, then I’m afraid that you are going to be disappointed. Johnson is still the best blocking tight end that the Steelers have, and continues to be an underrated contributor. He showed that in the preseason opener against the Giants.

Although it didn’t quite start out that way on the first play of the game; nor was it all his fault. The Steelers opened the game with two tight ends, Jesse James to the right of the line with his hand on the ground and Johnson to his right, off the line.

Off the snap, James protected the right edge while Johnson swept left, hoping to collect the right defensive end. From the looks of the ball carrier, the run was not designed to bounce out to the left perimeter. With the change of plans, Johnson would not be seeing what Olivier Vernon was seeing, giving the defender the advantage. One could argue that the back missed the hole in the right-side B gap.

Johnson wasn’t on the field for the two subsequent plays during the initial three-and-out, but he was back for the second play of the second drive. Facing second and 10, the Steelers ran a jet sweet with JuJu Smith-Schuster to the left.

It was the same formation with the same personnel as the first play. Smith-Schuster motioned for window dressing the first time, but this time he got the ball. And Johnson served as the lead blocker, doing so with great effectiveness, getting a hat on the safety and opening the left sideline for nine yards.

The line collapsed attempting to convert on third and one, resulting in another three-and-out, and the fourth drive ended on the first play with an interception, but they went back to the ground with the subsequent drive, Johnson playing a key role on the first two plays.

One again running out of 12 personnel, Johnson this time lined up at fullback before motioning off-line to the right in a balanced set. He once again pulled the left on this play and continued to show his improved athleticism from years past in entangling himself with the rushing linebackers.

For the next snap, he remained in the backfield and actually served as the fullback. He squared up nicely with B.J. Goodson and opened up the running lane for Fitzgerald Toussaint to rip off an 11-yard run.

While he didn’t get an opportunity to get involved in the passing game, the veteran showed off his versatility as a blocker, both out of the backfield and on the move. He is somewhat of a leader of this young group, and it’s hard to imagine him going anywhere. He is doing well.