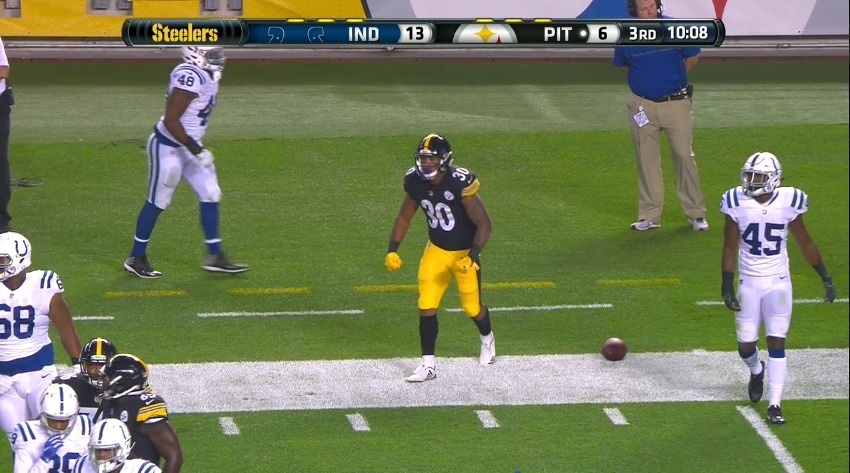 I’m not saying James Conner or Terrell Watson could beat Floyd Mayweather in a fight. I’m just saying I like their chances. They delivered a number of punches to the Indianapolis Colts’ defense on an otherwise dull night. Several examples for you.

Conner has the size the Pittsburgh Steelers are attracted to and when he plays with proper pad level, it shows. On this run, he pulled off a Le’Veon Bell type move, running over the safety while headed down the left sideline. Seek contact, lower the shoulder, finish the run.

Watson showed off his decisiveness and power all night. This run doesn’t go for much but he creates a big car crash, running through the linebacker (if you listened to the local broadcast, you heard the hit) before getting dragged down after losing momentum.

He also showed the ability to create and churn out tough yards when he doesn’t have initial momentum. Gets stuffed at the LOS, bounces off, and then it takes several Colts to take him down. Good pad level, keeping his feet moving, and getting three yards after contact.

Finally, it takes a lot to bring Watson down and the Colts couldn’t figure it out. Final drive with a few seconds left, Josh Dobbs checking down to Watson to try and get in better “Hail Mary” range. Colts’ defender knows Watson is running to the sideline and takes his shot. Brushes it right off.

It’s no secret the Steelers dig big, powerful backs. This offseason was spent collecting a ton of them. Signing Watson to a futures deal and drafting Conner. They know how to win – run downhill. And Sunday, did it effectively.