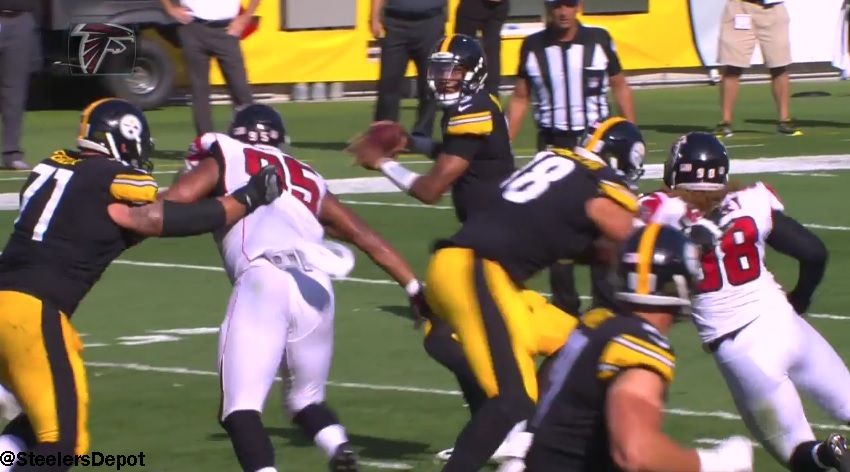 You hear the cliche a lot. The offensive line is all about continuity. They need reps. It’s one of the standard coach-speak lines you’ll hear during any game on your TV. But how can you tell when it doesn’t exist? And what are the consequences? That’s what we’re going to look at today. The Pittsburgh Steelers had some changes on the offensive line for Sunday’s game against the Atlanta Falcons. It showed. And not in a good way.

First third down of the afternoon on the Steelers’ first drive. The Falcons run a T/E (tackle/end) stunt to Villanueva/Feiler’s side. There’s miscommunication or a failure to recoginize the stunt. Feiler tries to pass the crasher off to Villanueva to pick up the looper, but Villanueva doesn’t squeeze the crasher, letting him free up the B gap to nearly sack Josh Dobbs. 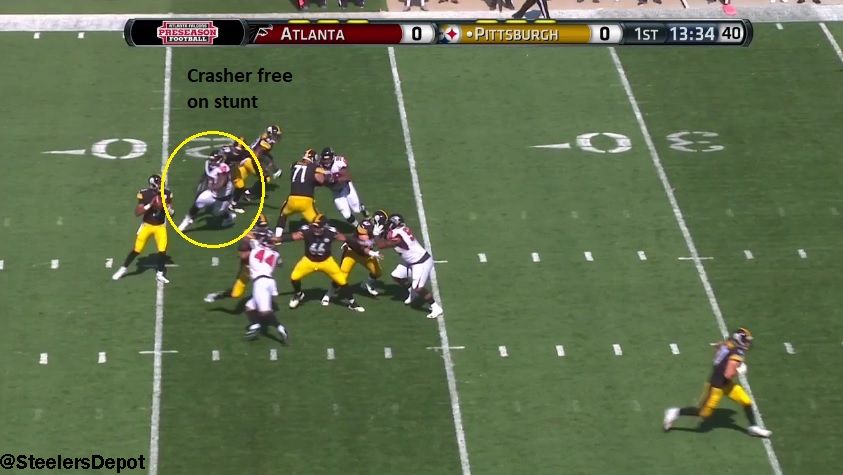 Stunts can be tricky. There’s usually a cue involved to communicate it – either verbally or non-verbally. Non-verbal cues can be knowing the opponent’s tendencies, when they like to stunt. Or how a player is lined up. A change in stagger or alignment can be a tip off. There probably isn’t much game planning or film study for this game but when you have two veterans like Villanueva and Ramon Foster, they’re things you can pick up on the fly. There’s also communication in passing off the stunt, an alert to switch, that may not have happened. Here, it’s impossible to know exactly who is at fault and when you have a failed stunt pickup, it can often be on both men.

But when you have two guys who have had very few reps together, Feiler got one day with the first time on the final day of practice, these mistakes happen. 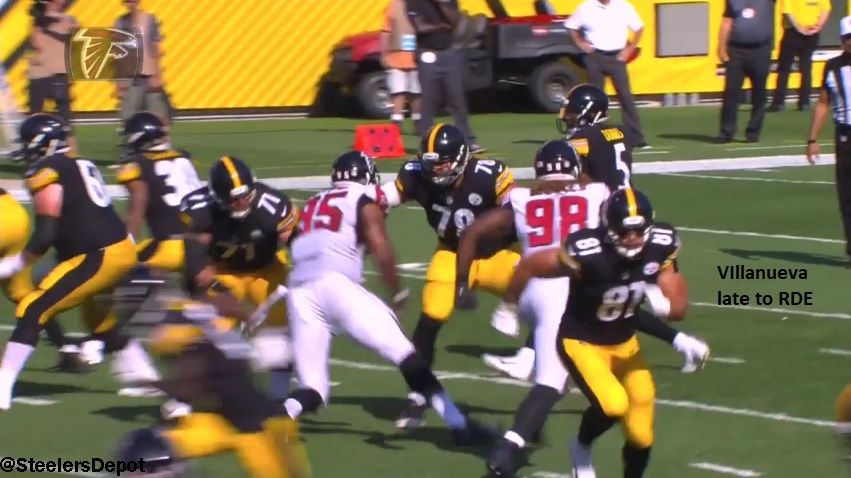 It wasn’t just exclusive to Villanueva/Feiler. Or pass protection. Run blocking showed a similar problem. This run loses several yards. The issue? Feiler and B.J. Finney both climb to the second level, instead of someone blocking the three tech, who comes in free to drop James Conner for a loss.

This comes from a lack of reps. With Finney running so much with the 1’s in camp, Villanueva obviously exclusively there, and Feiler with the 2’s, it throws off the dynamic and communication.

It was a similar story with Villanueva when he first stepped into the lineup, taking time to get in sync with Foster. Those two now gel and it’s why you don’t see screwups on zone rules in the run game or missed stunts in the pass game. And when the group gets shaken up, you run into these kinds of problems.