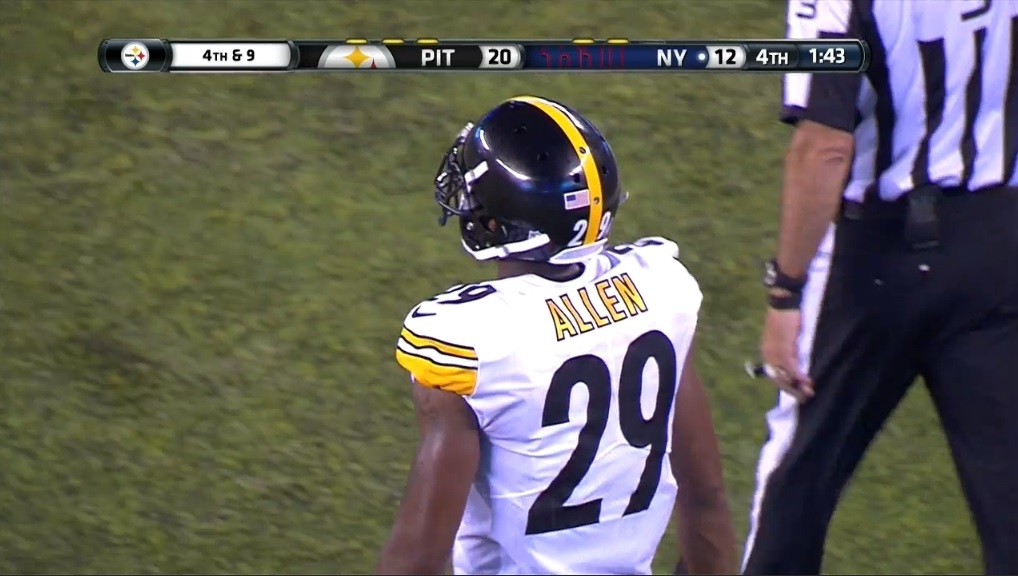 It’s been an up-and-down camp for rookie Brian Allen. His run fits and tackling looked better than his coverage. In the latter, he looked like how he was billed out of Utah. Raw.

But on his one target Friday night against the New York Giants, Allen was perfect. Color me surprised. And excited.

The Giants had a final drive to try and tie up the game. On 3rd and 9, rookie QB Davis Webb heaved a pass down the left sideline. On paper, in the box score, Allen and Malik Golden broke up the pass. But it was the how that was interesting.

A common misconception about playing cornerback is that they always have to get their head around to the ball. Find the ball, pick it off, reduce the chances of pass interference. But it’s a blanket statement that isn’t always effective.

In the NFL, quarterbacks are just too accurate. Receivers too fast. Look back for the ball, take your eyes off your man, and you’re likely to get burned. You’ll get “out of phase,” meaning you’re no longer in a hip-to-hip relationship with the receiver. And being a step behind is all it takes to allow a huge play at this level.

Unless the coverage is airtight, there’s a better solution. Keep your eyes on the receiver. He will take you to the ball. After all, that’s where the quarterback is throwing it, not to the DB. Of course, you can’t see the ball but the receiver will tell you when it’s coming. Their body language, eyes getting big, hands beginning to extend away from their body. That’s when the ball is there and that’s when the corner can make a play.

From Brophy Football, one of Nick Saban’s DB coaching points.

“When a corner is “out-of-phase” (i.e. low-shoulder with no help) he cannot look for the ball (he is not in a position to be a receiver) and must play the ball through the reception (catch up to receiver and discourage the completion).”

Allen does all that really well. Off the line, he’s arguably a little out of phase, working against rookie WR Keeon Johnson (who is a good athlete). In practice, I’ve too often seen Allen try to become the wide receiver – that’s his background – and look back for the ball. And it would put him out of position, far behind the play, and unable to compete at the catch point (where the WR grabs the ball).

One, brief example of that came from Brandon Dixon earlier in the game. Looks back for the ball, winds up grabbing the receiver because he can’t see him, and gets flagged. 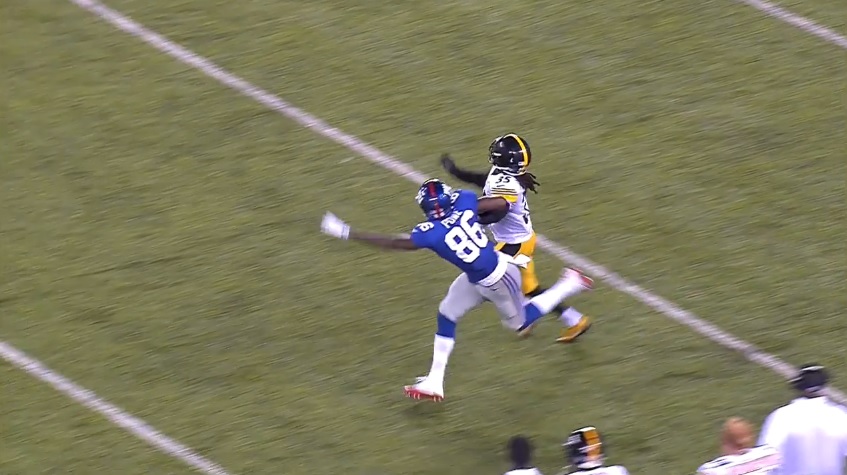 Instead, Allen keeps his eyes glued on the WR’s eyes, maintains his speed (looking back often slows the defender up, hard to turn your head and still run at full speed). 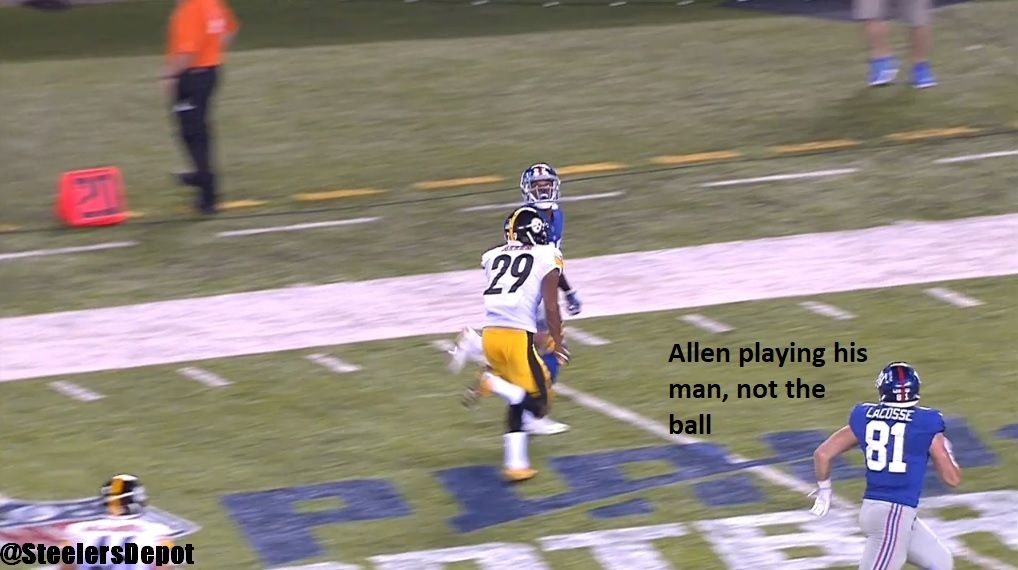 When the receiver begins to extend his hands, Allen swipes down to play the catch point and knock it away. No penalty, remains in-phase, and can finish the play. 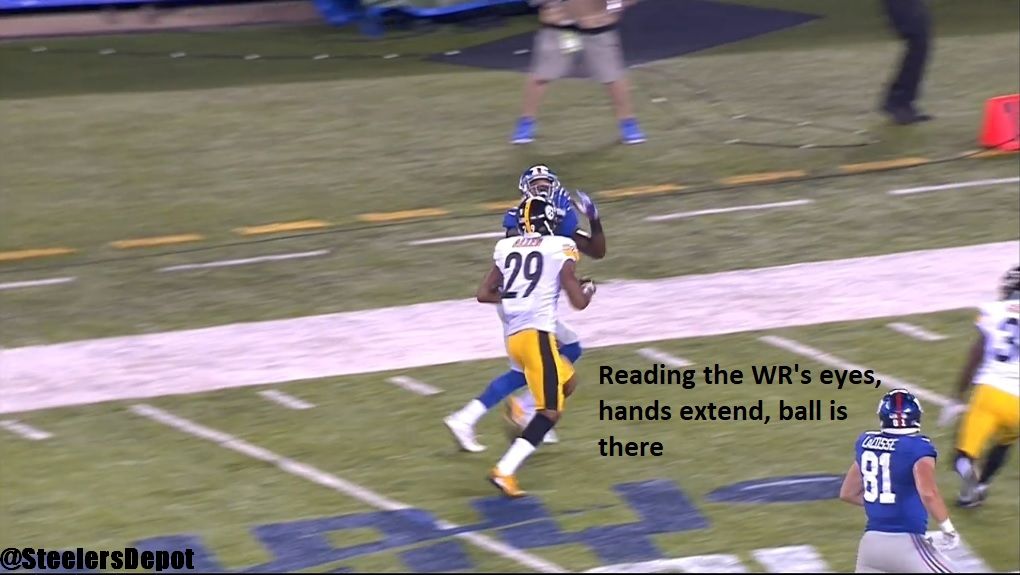 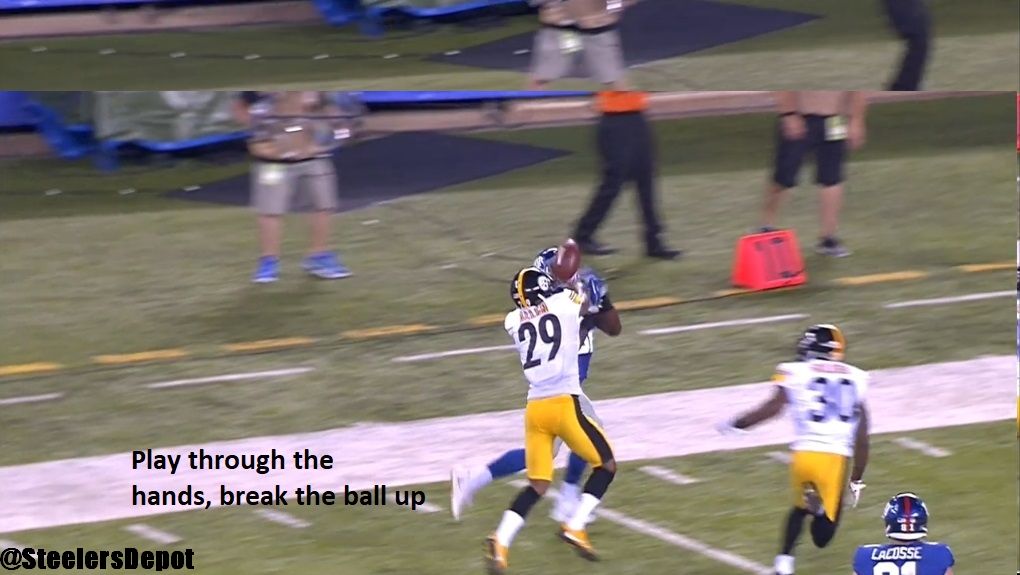 Allen is in there to initially break it up and Golden comes across to finish the play.

If Allen is able to do this consistently, he has the physical traits to thrive. The speed, physicality at the top of routes, and length to finish that will make him an effective press/man corner.

Because playing man isn’t about picking off 10 passes. Zone corners get to have their eyes peeled to the quarterback and ball. Man corners have to play, just that, their man, which means technique and finishing at catch points makes all the difference. This is really good tape for him and hopefully something he consistently does the rest of the preseason.