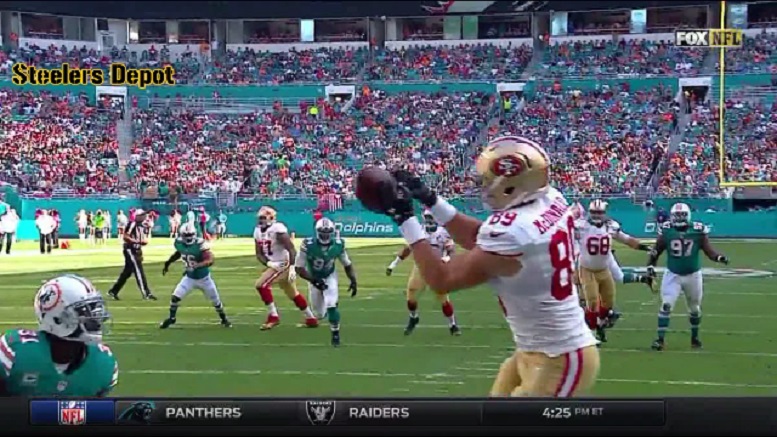 The Pittsburgh Steelers acquired tight end Vance McDonald in a Tuesday morning trade with the San Francisco 49ers and since that deal happened there’s been a lot of talk about his reliability as a pass catcher and especially when it comes to drops.

While Alex Kozora has already done a fine job of breaking down a lot of the good that comes along with McDonald, in this post, I’ll look at the 21 pass targets to him from last season that were incomplete.

Below is a video of all 21 incompleted targets thrown to McDonald last season and all are from the end zone view of the play. The table below is in chronological order for you to follow along with as well.

Now, one throw was undercut by a defensive back and intercepted while three others were broken up by defensive players and those should be easy to identify.

McDonald did indeed have a few bad drops last season. Three really noticeable drops and one that might be debated and that’s the one in the end zone against the Miami Dolphins. (see below)

If you consider that one a drop and I won’t hate you if you did, McDonald can probably be charged for four drops in 2016 on 45 total targets.

In a future post, I will look at McDonalds 2015 incompleted targets but wanted to start with his most recent season for obvious reasons.