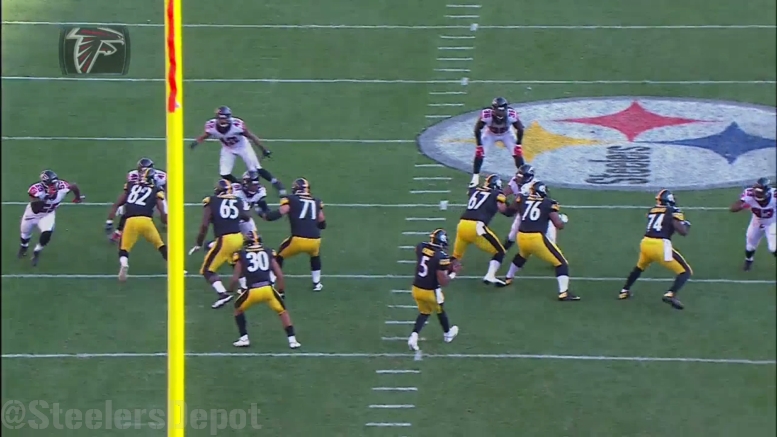 It still somewhat perplexes me how a player who has the size to play his natural position at the NFL level might struggle to do so more than at another. Yet despite being a college center, Pittsburgh Steelers second-year offensive lineman B.J. Finney himself has admitted to his struggles there, and yet made two very solid starts at guard a year ago.

This summer, the coaches have fed him extensive work at center, a prospect that was made much easier to do with Maurkice Pouncey missing time with, by appearances, a minor knee issue, which I’m given the impression is under control at this point.

That means that he has gotten a lot of work with the first-team offensive line in that role, and that included extensive snaps with the starters on Sunday against the Falcons, starting the game there at center, though he and Matt Feiler, also starting, played into the second half while the rest did not.

While he had his mistakes, Finney put together a solid game, both in the run game and in pass protection. He and Gardy Jarrett had some battles, including some wins, some losses, and some stalemates. Even though this play was only marginally successful, his initial push here gives him a win.

The following play, not so much. It looks like he may have dropped his eye level here, but either way, Jarret was able to rip underneath him and disrupt the running lane, chasing the play down for an assisted tackle after a short gain.

He did some good work against Ra’Shede Hageman in pass protection, however, completely stoning him a couple of times. That is one quality that Finney has always had, is raw strength. Here he puts it to good use.

Finney also recorded a win against the young defensive lineman in the running game later, I believe in the second half at this point. While he didn’t have to reach for the block, he did even get some push and drive him back slightly, creating a larger gap.

It wasn’t pretty, but the Steelers—aside from Feiler at left guard, who got beat—did a nice job of reading the Falcons’ stunts on this passing play, and that includes Finney, noting the left outside linebacker attempting to kick inside and rush the A gap.

I’m not entirely sure if Pouncey plays tonight—it seems that he will—but even if he does, it probably won’t be for very long. This could be another good opportunity for the second-year to solidify his role as a reliable interior swingman.