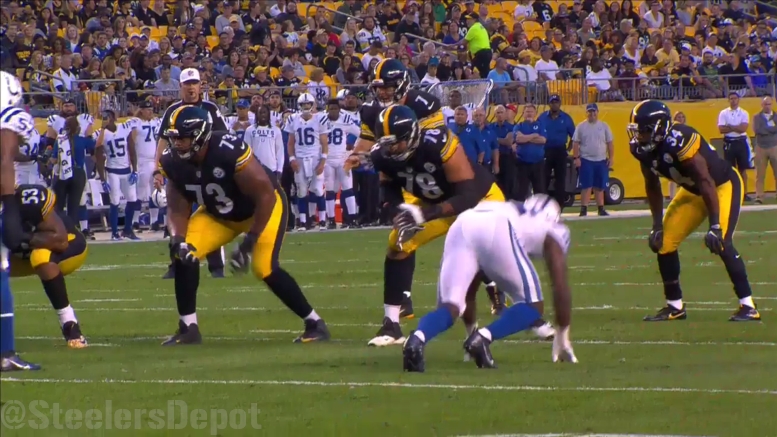 I have to admit that I had not been paying a lot of attention to the performance of Alejandro Villanueva, the Pittsburgh Steelers’ third-year starting left tackle, during the preseason so far. Of course, he missed the first game, and he played longer than the other starters in the second. The entire starting line played all of the first half against the Colts.

I couldn’t help but notice a couple of comments from people who were expressing disappointment in his performance, however, so that drove me to take a closer look. Personally, I think he handled himself pretty well, though he had a couple of moments. He had two sacks given up around his side, but neither would fairly be attributable to him, rather to miscommunication, so I won’t be highlighting them much here.

Frankly, I liked what he showed from the first snap of the game. Jabaal Sheard is a guy who gave the Steelers trouble while with the Patriots, but Villanueva stoned him in his tracks one-handed before proceeding to turn him inside on an outside run around left edge. Sheard eventually slipped, but that was due to being driven into traffic behind him, getting washed up.

His first look in pass protection came just a play later. While he showed good foot movement, his initial move was too hesitant and allowed the defensive lineman to get into his chest. After hopping back a couple half-steps and resetting, however, the left tackle ably neutralized him.

He had a much more difficult time during the Steelers’ second drive against Akeem Ayers’ bull rush, a player one would no doubt think a man of Villanueva’s size could handle without much issue. He is, I think, moving his hands too much rather than keeping them elevated, and he allowed Ayers to initiate contact, preventing him from planting his base, which allowed the rusher to push the arc toward the quarterback and nearly strip Ben Roethlisberger of the ball as he threw. This was probably his worst rep of the game.

I did want to look at the second sack here, against Landry Jones. The quarterback should be responsible for resetting the protection here after the defense tipped their blitz. The left guard and center end up double-teaming an inside rusher, while Villanueva picked up the edge defender, leaving the blitzing safety with no obstacle.

Villanueva did get beat again late in the first half, this time by Sheard. Once again, the rusher initiated contact, standing him up. This time, Sheard ripped underneath his outside shoulder and got completely past him. Had Jones not sensed it and stepped up into the pocket—making the throw and converting a third and 12—this could have been a sack.

In reviewing the game, I do see some mechanical questions that I have with Villanueva as we head into the regular season, as I don’t think he’s working with his upper and lower half in sync with consistency right now. He is too often allowing the defender to dictate contact in pass protection as well, but these are minor issues that can be fixed with ease, and I expect will be as he gets some more live contact.