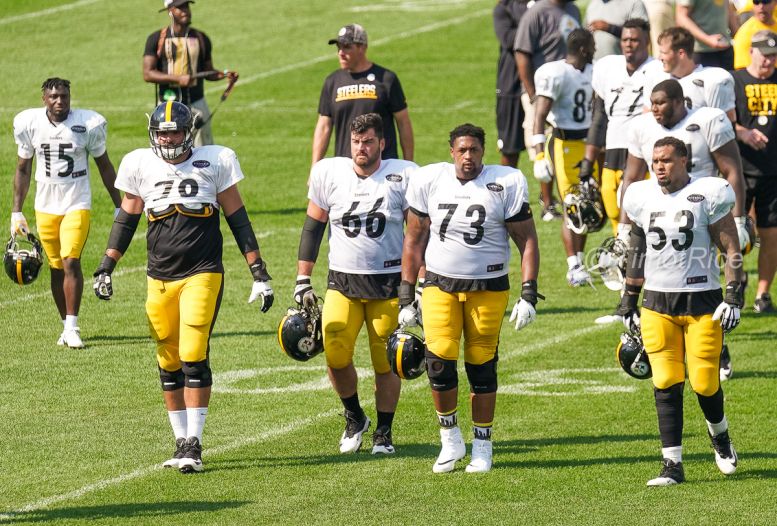 The Pittsburgh Steelers know that they have an offensive line that is still one the rise—and still intact. The offensive line knows it too, and they know all about the rising expectations that they face with every season that comes and goes. In fact, they embrace it.

Playing together is key, and to that end, the Steelers now have all of their starting offensive linemen wrapped up through at least the 2018 season. Ramon Foster is on the second year of a three-year contract that will see him play through his age-32 season, and that is the shortest contract remaining on the books.

Both center Maurkice Pouncey and right tackle Marcus Gilbert have three years remaining on their contracts that they signed a few years ago. Pouncey was a first-round draft pick in 2010, while Gilbert, his teammate at Florida, was drafted in the second round a year later.

Then there is Alejandro Villanueva, the newest member of the offensive line, who became a full-time starter last year in his second season on the 53-man roster. He just recently completed a four-year contract that will tie him to the Steelers through 2020.

And finally, there is DeCastro, who is locked up even longer after signing a new deal last year that runs through the 2021 season. The former first-round draft pick has made the All-Pro list in each of the past two seasons and isn’t interested in going backward, individually or collectively.

He said that the retention of Villanueva was “huge” for the team because “it keeps that continuity growing, experience growing. There is nothing better than getting those live reps, spending more time with Munchak”.

He also paid special note to Alan Faneca, the last guard to make a Pro Bowl for the Steelers prior to DeCastro doing so in 2015. The future Hall of Famer has been in training camp the past two seasons helping Munchak with the offensive line.

“We have Alan Faneca back for training camp helping us. He is like Coach Munch. He is another one of those Hall of Fame type guys who has the experience and knowledge. He can give us those tips and insight. You can ask random questions and just talk with him”.

The line made major strides from the beginning of last season that is anticipated to carry over into the 2017 season. Perhaps that is why, when Ben Roethlisberger was speaking to former Steelers cornerback Ike Taylor for NFL Network and Taylor was running down the list of his weapons, he made sure to remind his former teammate not to forget his offensive linemen.