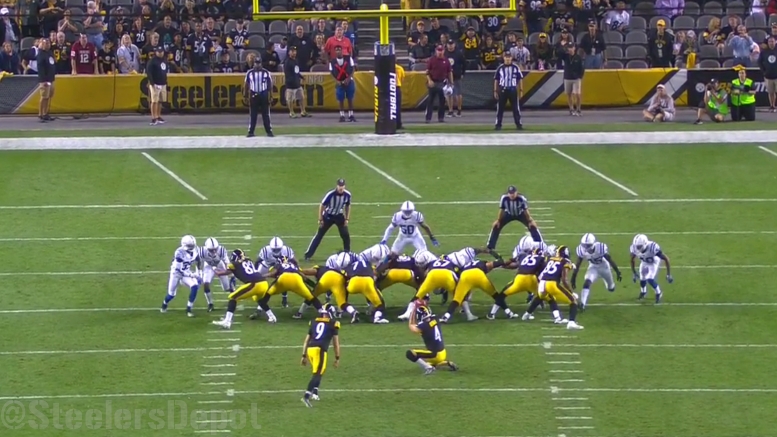 The deeper you dig into a game, the more details you will see, and when it comes to a preseason game, there are lot more things to notice with the personnel shifting so frequently. One thing that I couldn’t help but notice was that the Pittsburgh Steelers seemed to give the majority of Saturday night’s special teams snaps to long snapper Kameron Canaday, rather than rookie Colin Holba.

And when I say seemed, I mean actually did. Holba played just three snaps, once on a field goal, once on a punt, and once on an extra point attempt. His snap on the extra point attempt was high and prevented Jordan Berry from getting it down properly, resulting in Chris Boswell shanking it to the left.

So what does any of this mean? Is the long snapping job seriously up for grabs? If it’s Holba’s job to lose, then a high snap is one way to try to lose it.

I said this before after the first preseason game when I took a look at some of the long snaps from the game, but it bears repeating: I am far from an expert on this subject. I’m about as layman as layman gets when it comes to understanding what makes a good snap beyond the obvious. Get the ball to the target with accuracy and velocity.

While I think the velocity has been there—my impression of his first snap on a field goal try was that it was pretty much textbook—clearly the accuracy wasn’t on that one attempt. I also feel as though a couple of his other snaps earlier in the preseason shot too far inside the holder’s body, even though they did not produce a missed attempt.

As for Canaday, who got the first couple of long snaps on Sunday against the Falcons, I did not observe any obvious signs of imperfection on his reps, but as is the nature of preseason broadcasting, they don’t make it easy to tell. There were at least two snaps that were partially or entirely cut off, one on a punt and one on a field goal, so the only evidence that it was a passable rep is that nothing bad happened.

Canaday was an undrafted rookie last year who won the Cardinals’ job out of training camp, but he was released three games into the season following two poor snaps in that span. The Steelers originally signed him in February, but released him after the draft only to bring him back a few weeks later.

While Holba’s size attracted the Steelers to him, Canaday is also large for the position at 6’4”, 245 pounds. He was a four-year starter in college, while the rookie only handled long snapping duties for two years as a walk-on.