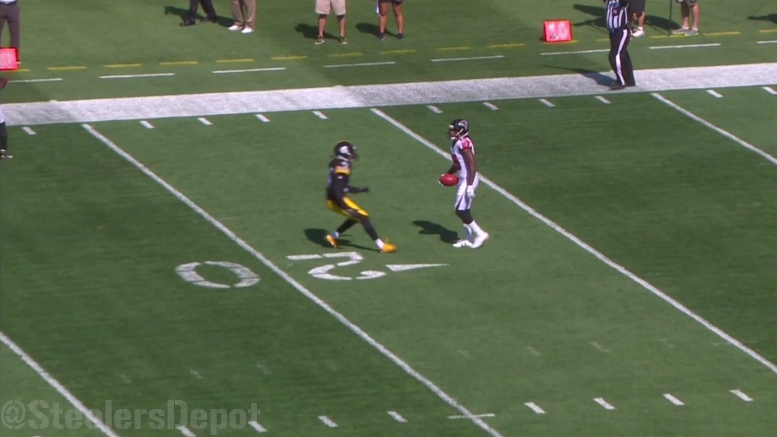 It was another game and another deep-roster defensive back stepping up, this time Brandon Dixon, who featured in the game against the Falcons as one of the Pittsburgh Steelers’ primary gunners on the punt coverage unit. He was particularly active in this role, and is the focus of this piece, but he also made some plays on defense as well.

By my count, Dixon, who spent time on the Steelers’ practice squad late last season, was primarily or indirectly responsible for inducing no fewer than four fair catches throughout the game, which is impressive work for a gunner, and a statistic that really gets overlooked.

Why? Because nobody tracks that as a statistic, but I’m of the opinion that they should. Players like Antwon Blake and Shamarko Thomas have had their capabilities as a gunner overlooked because they simply did their job so well that they forced returners to call for a fair catch, rather than allowing a return and then making the tackle.

As of the time of this writing, according to the official game book, Dixon did not record any statistic of any kind in the game. Think about that for a second. He had a significant impact on special teams, but nobody would know that unless they watched the game.

It’s worth noting that, while Dixon may have been a Reserve/Future signing back in January, he is not a novice in the league. He was originally drafted in the sixth round of the 2014 NFL Draft by the Jets, and though he did not make their 53-man roster, he was active for 14 games that season for the Buccaneers.

He even got playing time on defense, recording a total of nine tackles, making an interception and defending a pair of passes, but that is the last that he has seen of a 53-man roster, spending time on the practice squads of the Seahawks, Patriots, Saints, and finally the Steelers in 2015 and 2016.

It would be fair to say that the odds are probably stacked against Dixon making the Steelers’ 53-man roster at cornerback right now, given the depth that they have, but his active presence on special teams today will at least open some doors for him, either simply for a return spot on the practice squad, or potentially even a roster spot with another team, if they think he can make their special teams units better. That is how Blake’s career was jumpstarted.

The second-year cornerback—in his fourth season since being drafted—did look like he can play. On defense, he got a pressure as a blitzer, and he was targeted deep down the field on a fourth-down play at the end of the game, his pass defensed sealing the Steelers’ victory.