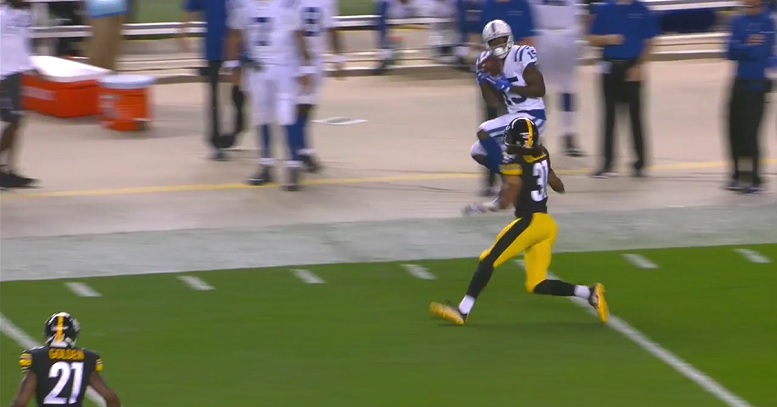 Is Pittsburgh Steelers’ cornerback Ross Cockrell the worst defensive back in the National Football League? Depending on who you ask, the answer to that very question may be a loud “Yes.”

Luckily, those individuals are not in charge of the team’s day to day operations.

Though Cockrell will never be as horrid as some make him out to be, it cannot be denied that the corner has had a very disappointing preseason to date. After being hung out to dry against the Atlanta Falcons a week prior, Cockrell’s struggles continued into last Saturday’s matchup against the Indianapolis Colts. The victim of an early pass interference penalty, Cockrell also let up a deep pass down the sideline to Colts’ wide receiver Phillip Dorsett.

For Cockrell, the next stretch will be the most crucial of his young career. Will the third-year cornerback find redemption and join the likes of Gay and Mitchell or will Cockrell continue to tailspin likes his fallen teammates Allen and Blake? Without a crystal ball, it’s impossible to speculate on Cockrell’s future production but looking at past victims of the DB doghouse, a telling picture begins to show itself.

For Mitchell, it is a return to grace. After an offseason filled with remarks such as overpaid or overrated, Mitchell was figuring in as an outcast in an emerging young secondary. But remarkably, Mitchell has erased those remarks from the memory of the fanbase with the help of backup safety Robert Golden. Another secondary player suffering through a poor preseason, Golden has made many appreciate the brash skillset that Mitchell offers in the secondary.

The opposite fortune awaited Allen and Blake. Though Allen and Blake were primarily starters during separate seasons (Allen – 2014, Blake – 2015), they both played themselves into the daunted DB doghouse. While neither were able to escape, their downfalls resulted in the pleasant surprise that was Brice McCain and the drafting of cornerback Artie Burns.

Like in past occasions, the Steelers are going to make a decision that betters their chance of winning. Though the Steelers are a considerably better team with Cockrell playing to his usual caliber, they will not chase the prospect of the Cockrell of old making a return. With the team already flirting with Coty Sensabaugh and even Cameron Sutton as the other outside corner opposite Burns in addition to the reported interest in the recently released Joe Haden, time is running out for Cockrell. With suitable replacements waiting in the wing, Cockrell must find redemption and return to form before the infamous DB doghouse claims permanent residence on his current stay.