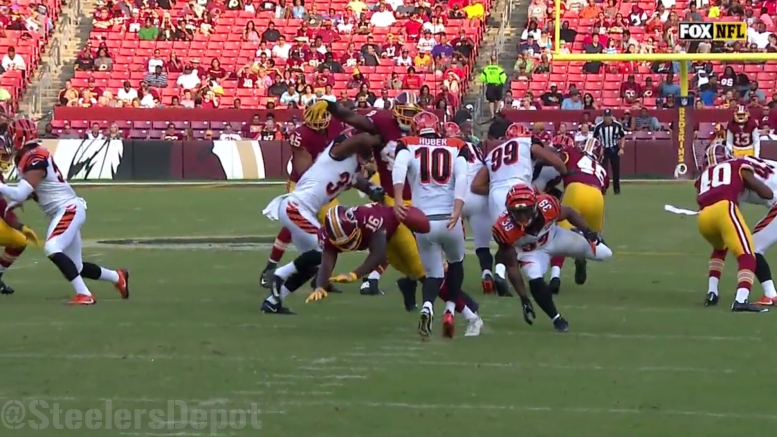 There are just some moments in sports that you really can’t predict happening, let alone seeing, that, even when they don’t work out, it almost makes it worth happening just to have been able to see it. It helps greatly that it was a preseason game, but I think that would apply to Cincinnati Bengals punter Kevin Huber’s failed punt late in the third quarter of yesterday’s game.

Attempting to get a punt off from about his own 20-yard line, the veteran punter quickly faced unblocked pressure off the right edge due to obvious blocking scheme miscommunication. Realizing that he would not be able to get the punt off, Huber twirled the ball behind his back as the oncoming defender sailed past him.

There was little opportunity from that point to actually get off the punt, and he was ultimately tackled for a turnover on downs soon after that, but there was little else that he could do. Plus, it looked pretty cool, and you’ll notice that nobody is talking about his getting tackled, but rather about the behind-the-back move.

Now, if that happened in a meaningful game, sure, it would be a different story. The man who once got lit up by former Pittsburgh Steelers inside linebacker Terence Garvin did his part regardless, however, as it was the protection that failed on the play.

After the game, he told reporters that he has no idea where that move came from. “I’m sure I’ve got some buddies who are wondering where that came from as well”, Katherine Terrell reported for ESPN.

In case you haven’t gathered by now, this is a light-hearted story about an amusing moment in a preseason game. I think we can use one or two of those every now and then, especially with what is going on in Texas right now.

As far as Huber goes, he is entering his ninth season in the league, all with the Bengals. He has a career 45-yard gross punting average with a 39.8-yard net average over the course of his career. He has had three of his punts returned for touchdowns—all of them by Antonio Brown.