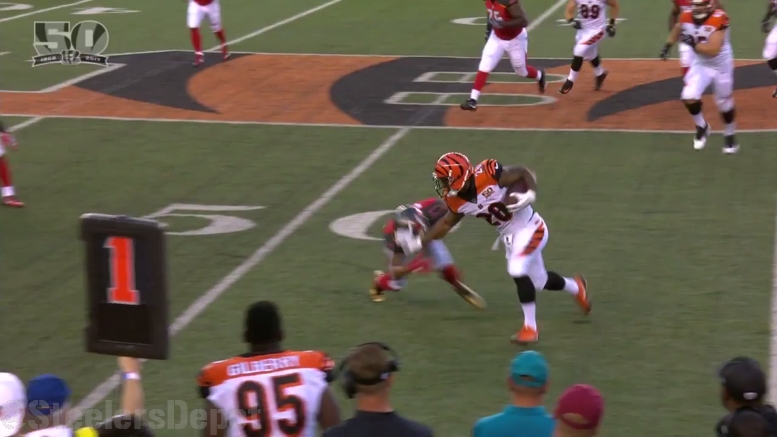 The Cincinnati Bengals are by no means an operation that conducts itself with a great sense of risk aversion. Helmed by owner Mike Brown, who has very publicly gone to bat for arguably his most troubled player off the field, cornerback Adam Jones, the team has gained a reputation as something of an Isle of Misfit Toys.

The Bengals received immediate backlash for the decision, with some even calling for a boycott, but at the end of the day, none of it is going to affect Mixon’s on-field career. While he may draw comparisons to Ray Rice for his questionable off-field hand usage, he has also been compared to Le’Veon Bell and David Johnson for what he can do with them on the field.

And the rookie was a hit for Cincinnati in his preseason debut. While his numbers themselves were not spectacular—he rushed for 31 yards on six carries to go along with a reception for 11 yards—he certainly looked like the player the Bengals were banking on having drafted, considering the baggage that he would be bringing with him.

Of course, another area of the team in which they have quite a lot of on-field baggage is the offensive line, where they lost their two most accomplished starters in free agency. They are banking on largely replacing their production from within utilizing recent high draft picks, while reuniting with an old face in Andre Smith.

One of the issues Cincinnati had on offense last year, even with the previous offensive linemen in place, is quite simply that they threw the ball too frequently. It was their first season under a new offensive coordinator, after all, though he had been the team’s quarterbacks coach going back many years.

With Mixon in tow, as well as Jeremy Hill, the Bengals are hoping to install a one-two punch in the backfield that will help to minimize whatever weaknesses they may have along the offensive line by running a more balanced offense than they did last season.

There is also, of course, Giovani Bernard, although he is returning from an ACL injury, and Cedric Peerman—who is also returning from a season-ending injury—but Mixon and Hill figure to be the primary suspects behind Cincinnati’s new running attack.

The Bengals are hoping that the rookie running back paired with their veteran downhill runner will reignite a physicality that will allow them to punch their opponents in the face. His body of work so far indicates that Mixon is the right man for the job.