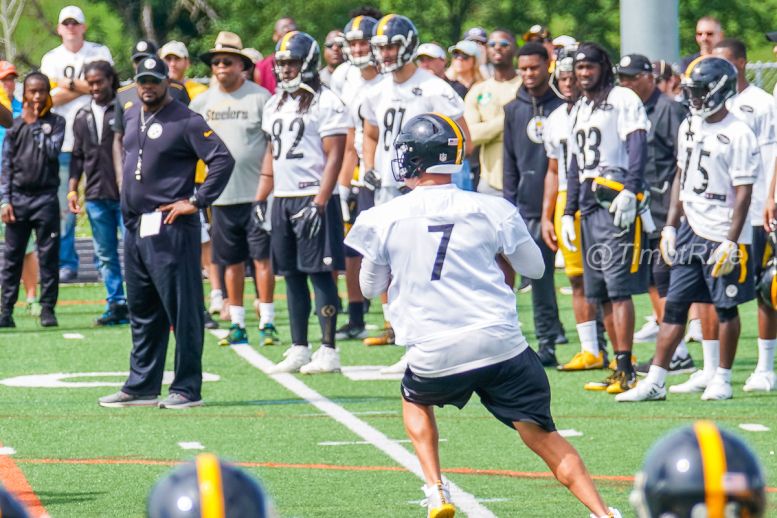 Nobody knows just what the future holds for Pittsburgh Steelers quarterback Ben Roethlisberger, not even himself…that is the point, after all. The 14th-year veteran has made it quite clear over the course of the past offseason that he is at a point in his career in which he is not going to make a commitment beyond one year at a time.

But that doesn’t mean he isn’t talking about the future. He recently sat down with former Steelers cornerback Ike Taylor at training camp yesterday, who is now working for the NFL Network. His former teammate asked him if he will see him out on the field for the 2018 season.

“I hope so”, was his genuine response. Taylor reminded him of past comments made by center Maurkice Pouncey about going out when Roethlisberger goes out. Big Ben responded, “that’s my guy. I won’t play any longer than him either”.

But regardless of what happens in the future, the goal from year to year never, ever changes. “Win the Super Bowl”, he said. “Be the best offense in the NFL”. It’s all about the Super Bowl for Roethlisberger, who has been there three times and won two of them.

While Roethlisberger has enviable Super Bowl experience, it is true that he has not been there since the 2010 season, and he has not led his team in victory since the 2008 season, which was far more than half of his career ago.

The Steelers have gotten closer. After not even reaching the postseason in 2012 and 2013, they won the AFC North in 2014. They advanced to the Divisional Round in 2015, and then to the AFC Championship Game in 2016. The only step remaining is to advance to and win another Super Bowl.

And Roethlisberger believes that he has the arsenal to get there. Along with his offensive line—arguably the best he’s ever played with, and for whom he made sure to give an especial mention—there are All-Pros Antonio Brown and Le’Veon Bell.

With Martavis Bryant returning, Eli Rogers and Sammie Coates a year further along, rookie JuJu Smith-Schuster coming in, and the further development of Jesse James, the pieces should theoretically be in place for the Steelers to have perhaps the best offense in their history, statistically.

Of course, we have probably said that before, and things don’t always work out that way. Recently, things have gotten sidetracks due to Roethlisberger’s injuries, and the injuries and suspensions of other key players. Luck as always is as much a part of any team’s success as anything else. And Roethlisberger is hoping that year 14 is a lucky number.