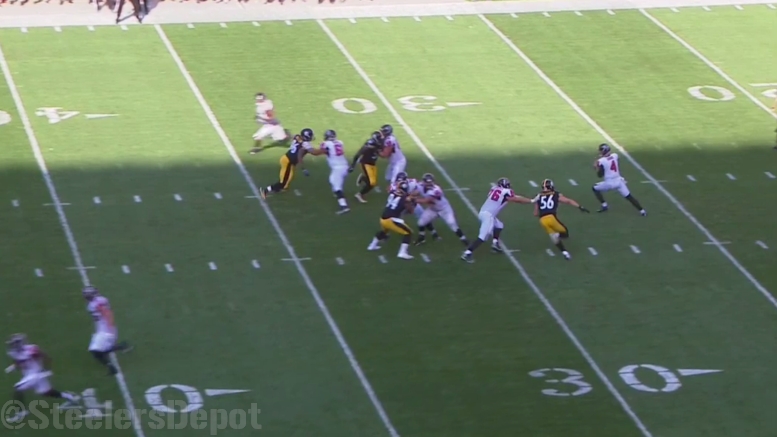 As I wrote about earlier today, it was anticipated that yesterday’s preseason game would mark the 2017 debut of Bud Dupree, 2015’s first-round draft pick, but while he dressed and was in pads, he never came off the sideline.

Starting in his place instead was Anthony Chickillo, the other outside linebacker that the Steelers drafted in the sixth round that year. While he only played 22 snaps during his rookie season, Chickillo did make a handful of starts a year ago while Dupree was on injured reserve, and he held his own, even if he wasn’t as much of a difference-making presence as two strip-sacks might indicate.

Still, none of that would take away the quality of play that the former college defensive end flashed against the Falcons yesterday evening. While it is worth noting that he has been consistently praised in years past—especially last year—for being impressive in training camp, a trend that continued this year, I feel as though we saw, among other things, a burst and bend to his pass rush that hasn’t been present, at least consistently enough, on his game tape before.

He showed that on both of his sacks that he recorded in the game, but he also showed off the diversity of his skill set against the run and even in coverage, completing his stat line with five tackles and a pass defensed.

The man whom Shaun O’Hara inadvertently referred to as “Chickadillo” during the game broadcast looked the part of a well-rounded player out on the field, which included, on the positive side, a recovered fumble on a punt and on the negative, an offside penalty on defense.

The Steelers, needing a jump start after a lackadaisical first half, capped off the Falcons’ opening drive of the third quarter by making stops on back-to-back plays. After a hold set them back, Chickillo made the run stop after two yards on second and 16, and then on third and long, he bested the left tackle and showed reaction time to be able to chase the quarterback as he stepped up in the pocket, bringing him down by the leg.

His first sack came midway through the second quarter, also from the right side. He failed to bite on the play action and, again, showed off his reaction time and agility as the quarterback attempted to peel away from him, dropping him for a 13-yard loss.

After Arthur Moats’ big game in the first preseason contest, Chickillo matched him in this one, in my opinion, even if the stat line is not quite as impressive as three sacks and an interception.