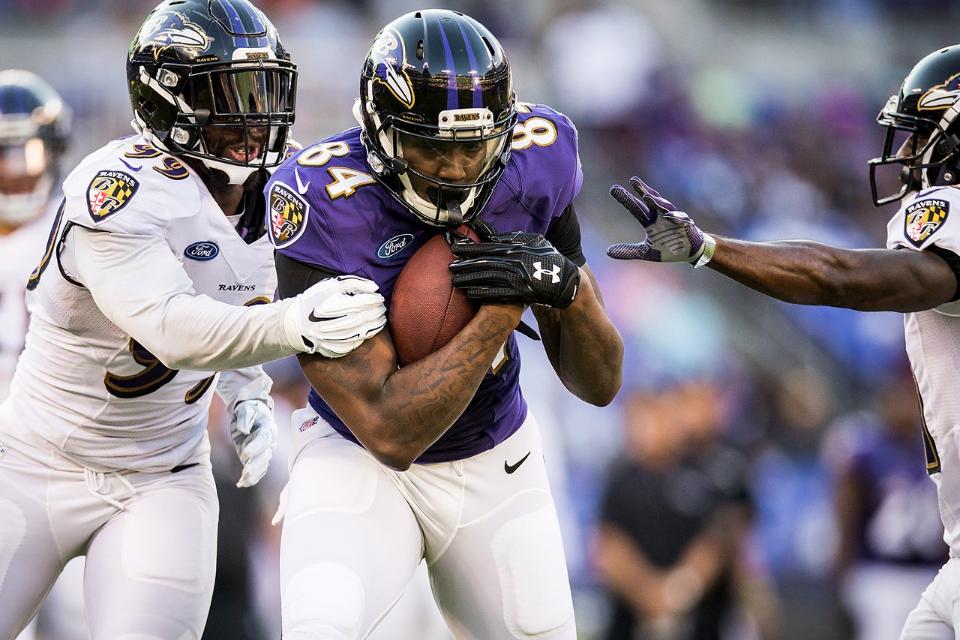 The saga of the Baltimore Ravens’ cursed tight ends continued yesterday when Larry Donnell, who has been running with the second-team offense, was forced to leave practice early after suffering a hand injury. Donnell, a free agent up until just recently, was signed by the Ravens after Crockett Gillmore suffered a knee injury that ultimately proved to be season-ending.

Head Coach John Harbaugh said after practice that he has not “gotten the final word” on Donnell’s hand injury at that time, according to ESPN reporter Jamison Hensley, who wrote that the tight end “hurt his fingers and hand” while making a diving catch, then “fell on the ball with his hand underneath it”.

With Donnell now injured—to what extent, it is unknown as of the time of this writing—the Ravens only have four tight ends practicing, two of whom are working back from injuries that landed them on injured reserve a year ago. This group also includes first-year tight end Ryan Malleck, an undrafted free agent who was with the Steelers earlier this year.

Hensley notes that Nick Boyle has been receiving the majority of the first-team reps with the offense during practice. Boyle, a third-year tight end, is the only fully healthy tight end on the roster with playing experience. He served a 10-game suspension in 2016. The former fifth-round draft pick has 24 receptions for 197 yards and no touchdowns in his career.

Also active are Maxx Williams, whom the Ravens drafted in the second round of the 2015 NFL Draft, and Benjamin Watson, a veteran tight end who will turn 37 in December. Baltimore signed him last year, but he suffered an Achilles injury in the preseason and missed the entire season as a result.

As for Williams, he suffered a knee injury early on in the 2016 season that landed him on injured reserve in early October. He underwent what was said to be a rare surgery to repair the damage that he suffered, and experience that was an eye-opener for him about how easily things can be taken away from you.

“It gave me a new appreciation for the game that I didn’t know that I had”, he told reporters at the opening of training camp about his bid to return to the field. “I still love the game just as much, and I’m just trying to make the most of it now”.

Previously this offseason, the Ravens had to endure the loss of starter Dennis Pitta, who suffered a hip dislocation for the third time in the past four seasons. He missed all or most of the 2014 and 2015 seasons before posting career-highs in receptions and receiving yards in 2016, but it is likely that his career is now over.

To round things out, Darren Waller, another tight end, has been served a year-long suspension. With neither Williams nor Watson looking as though they are all the way back from their injuries, the signing of Donnell was a necessary step. They must now hope that his hand injury is not serious.