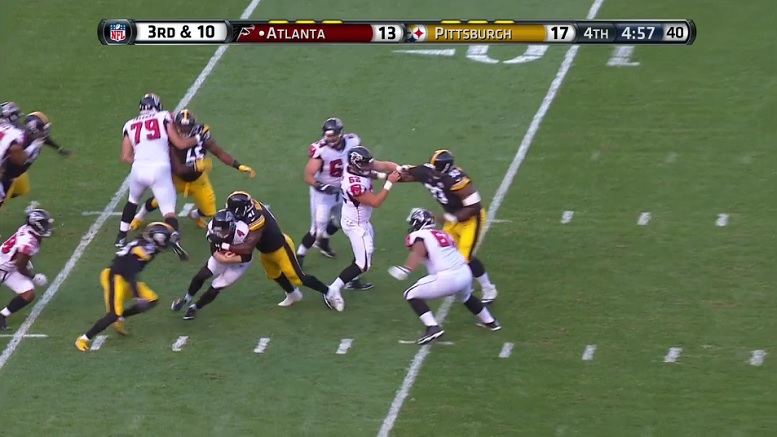 Now that we know that Pittsburgh Steelers rookie outside linebacker Keion Adams is likely going to spend the entire 2017 season on the team’s Reserve/Injured list due to a shoulder injury, the main beneficiary of that unfortunate news will likely be fellow outside linebacker Farrington Huguenin.

Assuming the Steelers ultimately keep five outside linebackers in total on their 53-man roster this year with veteran Arthur Moats likely being No. 5, Huguenin, a former undrafted free agent out of Kentucky, will more than likely be a perfect candidate to land on the team’s practice squad with Adams now out of the picture.

Through the Steelers first two preseason games, Huguenin has played 68 total defensive snaps in addition to 14 special teams snaps. He’s recorded a sack in each preseason game in addition to two other tackles. It should be noted, however that his first of two sacks came late in the preseason opener against the New York Giants and was a result of him chasing a scrambling quarterback out of bounds.

Originally signed as an undrafted free agent by the Miami Dolphins in 2016, Huguenin was waived injured by them roughly one full year ago due to an ankle injury he had suffered. After initially clearing waivers and reverting to the Dolphins Reserve/Injured list, they quickly waived him again with an injury settlement a few days later. After the Steelers 2016 season ended, they signed Huguenin to a Reserve/Future contract and he’s been with the team ever since.

With two preseason games now remaining for the Steelers, Huguenin is a player to watch closely in those contests as he’s likely going to remain in Pittsburgh after the final roster cuts are made. If he sticks on the practice squad all season, assuming he lands there, he could potentially challenge for a roster spot a year from now.