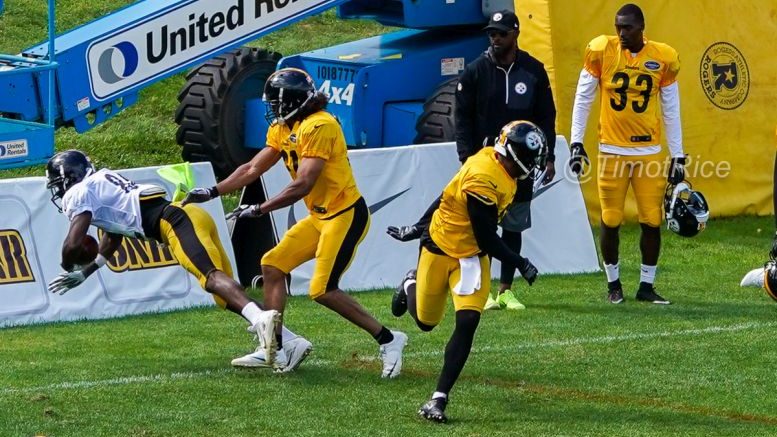 If Ross Cockrell was envious about all of the work that the Pittsburgh Steelers’ coaches gave second-year cornerback Artie Burns against All-Pro wide receiver Antonio Brown, then perhaps his tune might have changed somewhat after two consecutive days of his fellow defensive back on the sidelines and him responsible for shadowing the best in the game.

While he may have had a few moments of his own over the span of the two days, it would be fair to say that Brown frequently had his way with the fourth-year cornerback who is no doubt inexperienced working against him, given that Burns has been covering him for essentially the past two years.

It got ugly early on during yesterday’s practice. During a one-on-one, according to Chris Adamski, the wide receiver burned Cockrell for an easy 35-yard hook-up for a ‘touchdown’. After celebrating in the end zone, Brown went up to Burns, nearby on the sideline.

That’s got to sting. The reporter notes that Cockrell did not appear to be amused. I certainly wouldn’t be if I asked for reps against Brown, only to be embarrassed by him on the field, and then verbally adjacent to it.

Of course, while it is not a seamless comparison, one might be inclined to note the stark contrast between Burns’ performance covering the All-Pro this year versus how he looked doing so a year ago. Granted, the cornerback was an inexperienced rookie, while Cockrell is a veteran with two years’ worth of meaningful NFL playing experience under his belt. But not experience covering the best route runner in the league.

I still believe that this is a learning opportunity for the young cornerback, and while he may get roughed up by his elite teammate, he will have gained something from it that he can incorporate into his game. But I can’t help but think that at least a part of him will be relieved once Burns is able to return to the field from a minor leg injury.

According to reports, that could happen as early as tomorrow. But hopefully soon after that, the cornerback’s life is not going to get all that much easier once Martavis Bryant receives a full reinstatement from his suspension.

Cockrell has had a good battle through most of training camp with Justin Hunter, but Bryant is at another level. He should more than have his hands full going up against that sort of talent that he won’t be worrying about Brown.

Still, I think that when everybody is on the field practicing, it would be wise to allow both cornerbacks opportunities to cover both wide receivers, if only to gain the reps against different body types, as they will inevitably see that sort of variety in their opponents.