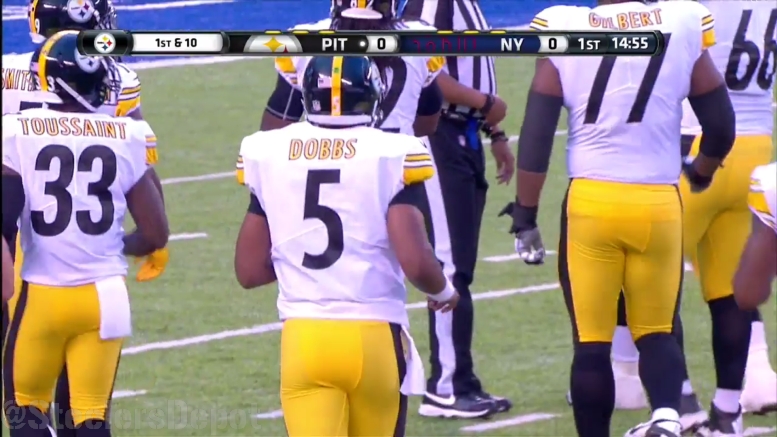 Question: Did Joshua Dobbs play above, below, or at the expectation level you had for him coming into last night’s game?

Whenever a team drafts a quarterback with a moderately high pick, there is inevitably going to be a lot of attention paid to him. After all, there is no position more important in the game, so if you find a good one, good things can follow.

The Steelers used a fourth-round draft pick on Joshua Dobbs during the 2017 NFL Draft for…who knows. That is yet to be determined. But with Ben Roethlisberger being too important and Landry Jones nursing a rib injury, the rookie was afforded a near-prime opportunity to showcase his skills.

I say near-prime, of course, because the first-team offense was without its five or six of its biggest playmakers at the skill positions as well as two of its offensive linemen, so Dobbs was not playing with a full deck, but there was enough there to give him a good look.

On the evening, the rookie completed eight of 15 passes for 100 yards, with one touchdown and two interceptions. He also scrambled one time to pick up 16 yards, and took one sack. On the first interception, he may have been contacted by a defender, but the other interception was a poor read of the defense.

The touchdown throw was unsurprisingly one of his best of the night, and one of two vertical passes that he completed, the other for over 40 yards—both to Cobi Hamilton. In fact, his accuracy seemed to be better on long throws than on short and intermediate routes.

Much of what he did show in the game correlates with what we have seen and heard about him in training camp, though I must say that personally I was hoping—perhaps even expecting—to see a bit better from him.