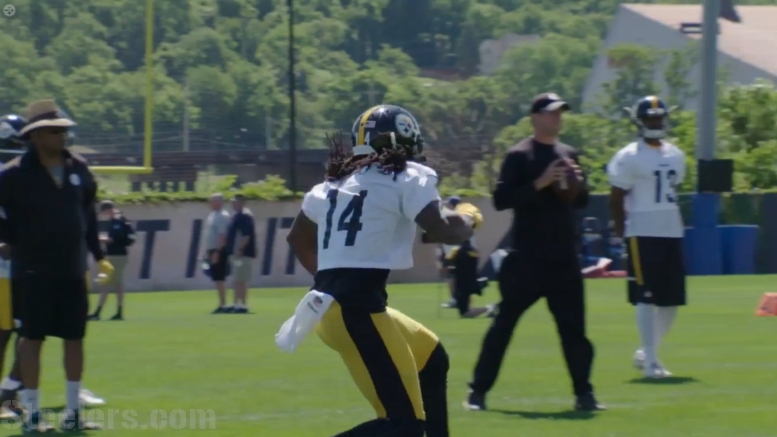 Question: How soon will Sammie Coates return to practice, and how far behind will he find himself?

I think it goes without saying that the prevailing thought on the matter is that Sammie Coates is in trouble if he hopes to make the 53-man roster in his third season. The former third-round draft pick came out of the gates like gangbusters last year, but a hand injury virtually crippled his offensive production just five games into the season.

Since that season, there have been three moderate to major developments at the wide receiver position, starting out moderately with the signing of free agent Justin Hunter and steering sharply into the major territory with the conditional reinstatement of Martavis Bryant, shortly followed by the drafting of JuJu Smith-Schuster in the second round.

Both Hunter and Smith-Schuster have already garnered time with the first-team offense even without Bryant present as he awaits his full reinstatement, so one might think that he will be hard-pressed to find too many snaps with Ben Roethlisberger.

Since his hand injury, Coates has been the walking wounded. He suffered a hamstring injury late in the season and during this offseason has already had surgeries on his groin and now his knee. It is the latter currently that has him on the Physically Unable to Perform List.

But according to Alex Kozora and other observers, he has been catching on the JUGS machine practically daily and has ramped up his physical activity. There is a growing belief that he could be activated by the end of the week.

Assuming that he is, however, it is still unlikely that he would be given the opportunity to play in the first preseason game, just having come back from injury. Once the dust settles after that first game, how far behind the eight-ball will the third-year receiver find himself? And what level of opportunity will he be afforded to reclaim at least partway his status from the start of last season?