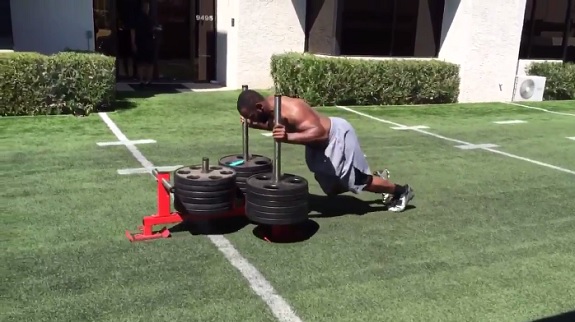 Several Steelers are training with James Harrison this offseason and to no one’s surprise, it’s paying off in big ways. On Thursday, Vince Williams tweeted out that Harrison’s workouts were tough to keep up with. But come Latrobe in two weeks, that intense training will be worth it.

Deebo got me out here dying training camp gonna be a breeze ??

Williams, Robert Golden, and others have been in Arizona with Harrison. I’m sure you’ve seen the videos from absurd weight room work to playing Danneyball on the volleyball court.

For Deebo, the offseason is his training camp. The Steelers will limit him during the preseason, they’ve already said as much, letting his body rest and stay fresh to endure hopefully another season that extends well into the winter.

Harrison isn’t a vocal leader but like Antonio Brown, people around him follow for his work ethic. A recurring theme of the offseason is how the young guys emulate him, though no one can replicate his workouts. Keion Adams quickly found out about Harrison’s habits and coming from the same conference serves as another piece of inspiration.

“What Deebo does is take care of his body all the time, spends a tremendous amount of money on his body, taking care of it. Offseason workouts, he does a great job of that. Even at his age, he still works like us like he’s trying to prove a point.”

Those two aren’t alone. Basically everyone on the Steelers – and in the city of Pittsburgh – can’t help but marvel at what Harrison is still able to do at this age, seemingly with no signs of slowing down.

His workouts are an Internet sensation.

And to his teammates, inspiration.