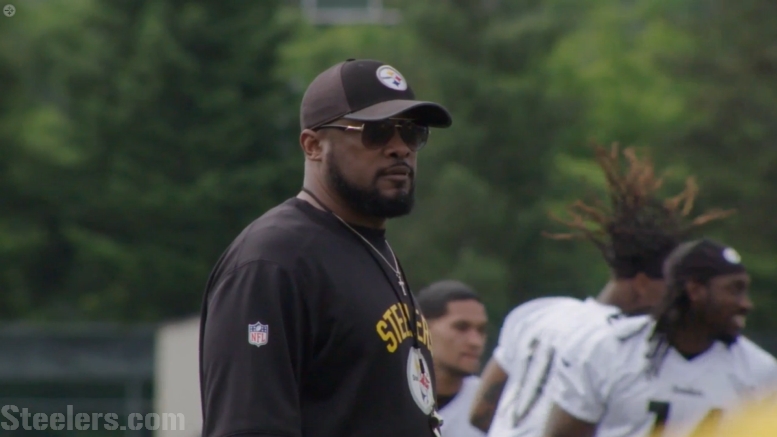 Pittsburgh Steelers running back Le’Veon Bell failed to show up Thursday at Saint Vincent College in Latrobe for the start of training camp and while that probably didn’t shock head coach Mike Tomlin, it still doesn’t mean he wasn’t holding out hope that the former second-round draft pick would have a late change of heart just the same.

During his first training camp press conference of 2017, Tomlin was asked to give his thoughts on Bell deciding to stay away and his response was quite predictable.

“Obviously, I would like him to be here,” Tomlin said. “He is not, but I am going to focus my energies on the guys that are. It’s an unfortunate circumstance. One that we will deal with. One that he will deal with.”

While Bell is away from the Steelers, he’ll likely continue to train at Bommarito Performance Systems in Miami, FL. While Tomlin expects that Bell will remain in top physical shape on his own, he is somewhat cornered about a few other things related to him being away from the team during training camp.

“He is in shape over the course of a 12-month calendar,” Tomlin said. “Football conditioning is not an issue with him, but rust and overall readiness will be. That’s to be determined.”

Tomlin made sure to emphasize again later during his press conference that there’s value to players being part of the team during training camp.

“There’s no question we are a group that values this team-building process, and doing it in this setting,” Tomlin said. “So yes, there is value, and yes there are consequences for not being here. That’s just the reality of it.”

When asked what those consequences are, Tomlin refused to specify.

“They are untold as we sit here,” he said.

As mentioned several times over the course of the last few weeks, Bell certainly has every right to stay away from training camp being as he’s yet to sign his $12.12 million franchise tag tender. With that said, however, him staying away from training camp won’t change a thing when it comes to his contract situation this year as the Steelers aren’t allowed to sign him to new deal until after the season ends after failing to get a long-term contract done with him prior to the July 17 league deadline.

If Bell is worried about getting injured during training camp, he really shouldn’t be as it was unlikely he’d get many practice reps over the course of the next several weeks and especially being as he recently fully recovered from offseason groin surgery. In essence, he probably runs about the same level injury risk while working out on his own as he would while being extremely limited during training camp practices.

Besides, if Bell were injured during practice after signing his franchise tag, at least he’d still get his $12.12 million this year. Should, however, Bell suffer a serious injury while training on his own, the Steelers could rescind their tender and Bell wouldn’t receive a penny from them.

For now, all Tomlin can do is wait for Bell to sign his tender and report for duty. At this point, its anyone’s guess as to when that will be and there’s a good chance Bell never steps a single foot on Saint Vincent College this year.

“I have had good, clean communication with him. I will leave the nature of that conversation between us, but rest assured that he will be ready to play football,” Tomlin said Thursday. “When he gets here, I do not know. I will remain focused on the guys that are here and their overall development. When he gets here, he gets here.”