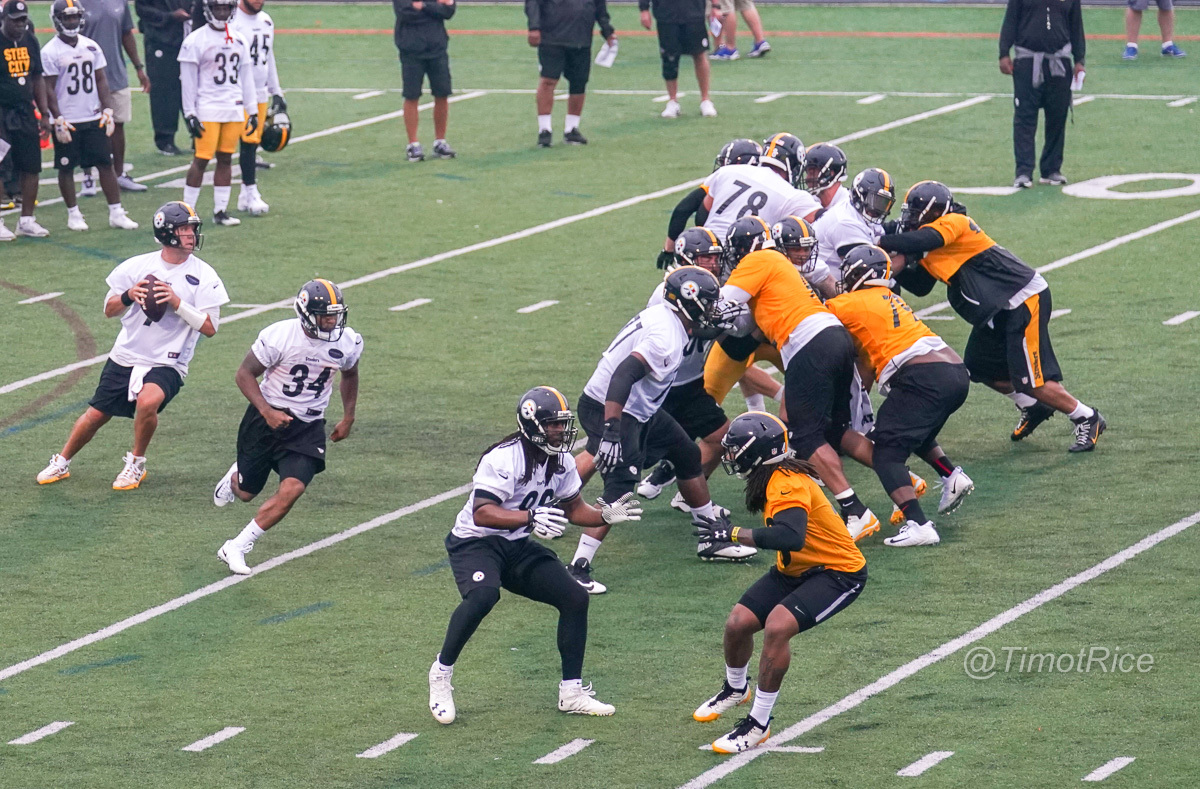 Day One is in the books for the Pittsburgh Steelers. We’ve learned a little. Not a lot but have a baseline understanding for where a lot of these guys are lining up and who they’re running with. Now we look to pick up where we left off for Day Two.

We’ll go position-by-position with a couple notes of what I’m looking for on Day Two.

– Josh Dobbs had an up-and-down day one. Want to see him learn from the one big mistake he made, throwing across his body to force a throw. It’s just one play, nothing to make a big stink over, but progression is key. I did feel like he got the ball out quick and had a good internal clock. Much better than Landry Jones when he was a rookie or heck, even in his second year.

– It’s a position that might be the toughest to judge until the pads come on. Knowing assignment is hard in one glance from a side perspective. But James Conner is the obvious name to watch, out of the backfield and on special teams.

– Want to get a better feel for who is running behind the top three of Toussaint, Davis, and Conner. Is Terrell Watson the top (bottom) dog? Or someone else?

– I am less concerned with the pecking order. It’s sorta fleshed out. So this is a group where I try to lean more on individual performance. Want Jesse James to make a play in seven shots. Had one target yesterday, batted away by Vince Williams. For these tight ends not named David Johnson to get noticed, they have to make combative catches. Red zone and over the middle, that’s where they make their money.

– Demarcus Ayers is someone I didn’t get a very close eye on in Day One. Want to see where he’s lining up. On the outside in addition to the slot? Or now, just the slot?

– And I hope Justin Hunter can go out and make a big play. Had a couple of catches from Ben Roethlisberger but nothing that jumps off the page.

– Marcus Tucker has got to step up too. One target was incomplete, though not really his fault, and he dropped a low pass on a comeback in 7 on 7’s. It’s a tough life to be on the bottom of the depth chart. Just like how he made the team as a tryout guy, gotta make a play to draw attention.

– And of course, making sure JuJu Smith-Schuster is healthy and practicing. Should be but we’ll see how that ankle feels after a night in a dorm room bed. Not the most comfortable thing I imagine.

– Don’t expect any moving or shaking on the lines from Day One to Day Two, barring injury. The tackles all looked good; Villanueva, Gilbert, and Hawkins. Again, when the pads come on, and we get some OL/DL sparring, we’ll have a lot more to report.

– Want to take another look at Daniel McCullers to make sure we know where he’s running. The DL rotates as much as anyone so we’ll see if there are reps split between he and Johnny Maxey at the nose, which is still a bad sign for Big Dan.

Christian Brown and Francis Kallon barely showed up in my Day One notes. Want to see where they’re at. Especially Kallon, the intriguing 6’5, 293 pounder.

– More of T.J. Watt, especially against the run, where he may have struggled a bit Friday. Bud Dupree and Marcus Gilbert will hold some of the best camp battles, too. And Farrington Huguenin. Like learning about the guys no one has ever heard of.

– Steven Johnson was someone I missed Day One. Want to know where he’s running at. What the rotation is like, maybe he is splitting second team work. Not sure. So that’s important, knowing he and L.J. Fort and dueling it out.

– Speaking broadly about the secondary, want to try and get a better look at them from a scheme standpoint. How much more man coverage is there? Or press. Got a feel for it yesterday but I wasn’t focused in on it. More tuned to who was lining up and running where.

– Brian Allen is another guy I don’t remember seeing on defense but it’s possible I totally missed him. Lot of guys shuffle in and out. So want to be able to report more on him for you guys tomorrow.

– Honestly, it’s now a boring group with Daimion Stafford’s probable retirement. Sean Davis has to have a big year but without being able to hit tomorrow, we’re not going to learn a ton. Give it until Sunday.