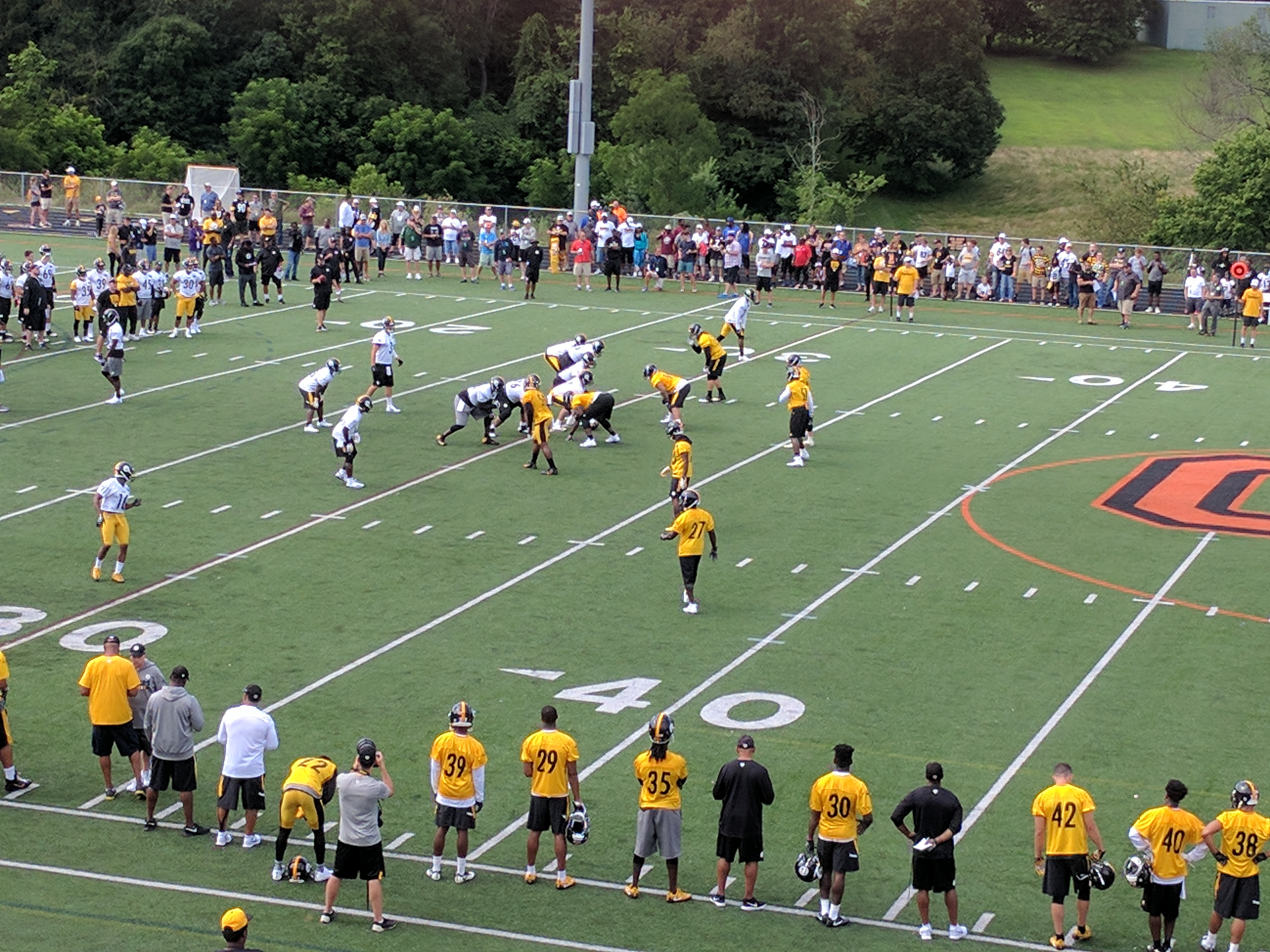 And yeah, you can bet there’s a lot to check out today. Sunday is the first day the pads come on for the Pittsburgh Steelers. No one is more excited than Vince Williams.

Full pads tomorrow and GOT. It feels like Christmas in July.

Let’s dive into what we’re keeping a close eye on.

– Josh Dobbs has had a tough first two days. Nothing to fret over. Just looking for progression. Literally. Not seeing the field well, forcing balls into coverage. Game is going to move a little faster today. Pads on, intensity level ramps up, everything feels “real” for the first time. Big day for him.

– Really the first day you can evaluate them. With the pads off, it’s almost impossible to evaluate. Now we’ll see what someone like James Conner can do. Guys have to be able to create and finish runs.

– Like I mentioned on yesterday’s podcast, Xavier Grimble needs to make a couple big plays. It’s been early so again, no worries, but he hasn’t really popped in shorts and shells. A time when you’d think he would shine. Phazahn Odom will get to show where he’s at as a blocker too, which could be a wake-up call. And if they’re at SVC, they’ll be hitting the sleds, where some of the new/young guys struggle. Big day.

– Justin Hunter with an impressive second day. Now has to carry it over to the practices that matter. When the defense can actually hit you back.

– Demarcus Ayers is going to see more time in the slot with JuJu Smith-Schuster out. He has the short-area burst to create space. Let’s see him translate that into one of these practices.

– Cobi Hamilton made his name for making tough, combative catches. That has to continue. And I want to see him stop leaving his feet to make every single grab. Something I pointed out during the offseason.

– Sorta like running back, it’s tough to evaluate the offensive line when the intensity level isn’t at its peak. And the first team line isn’t a group we have to learn much about. More about the second teamers, especially Jerald Hawkins. He’ll get a lot of Anthony Chickillo. Should be a fun one.

– We’ll get a good look at L.T. Walton at nose tackle. How he handles double-teams and the point of attack. And a good look at Tyson Alualu for the first time.

Should also get OL/DL one-on-ones for the first time all year. The o-line is at an obvious disadvantage but it’s still fun to see these guys compete. Does Daniel McCullers break out his spin move?

– Lot to talk about here. Bud Dupree will have his hands full with Marcus Gilbert. Ditto T.J. Watt with Alejandro Villanueva. And the aforementioned Chick/Hawkins faceoff. But it’s not just about their ability to get after the quarterback. Have to be sound against the run, too.

– L.J. Fort has quietly had a good first two sessions, including an interception on Saturday. And of course, with pads on for the first time, who will Vince Williams first victim be?

– Corners have been able to make plays on the ball the first two days. It’s a lot easier to do that when you don’t have to worry about tackling. Let’s see whose game is complete. Ross Cockrell improved in that area last year. Let’s see if that progression continued.

Senquez Golson looked good enough the first two days. But this is his first padded practice in the NFL. So a big moment for him. Gotta rise to the occasion.

– Finally, something to talk about with these guys. Mike Mitchell, Sean Davis, Jordan Dangerfield, all guys who are searching for some big hits. Should be a fun one.