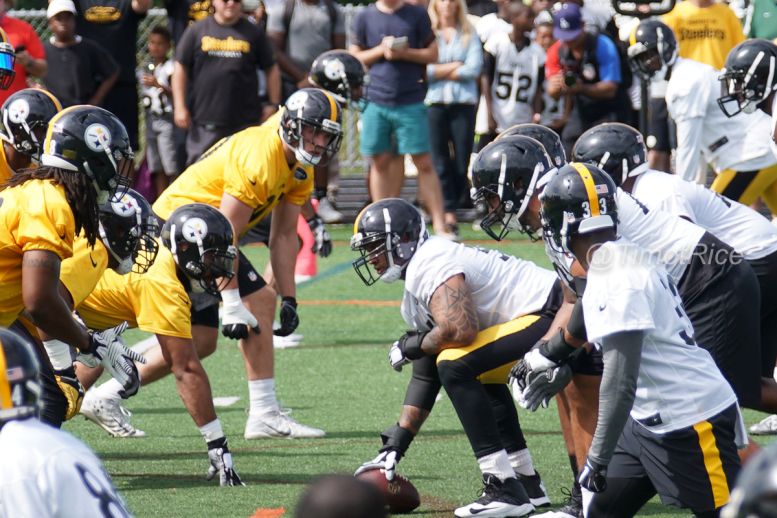 Back in the pads for what should be another intense practice. Assuming Ben Roethlisberger returns, the offense should be more competitive too; obviously, with him under center, but as Mike Tomlin has noted in the past, his mere presence gives the offense a boost.

Before we get into Monday’s practice, I want to recap a little from yesterday. Know I wrote a ton and didn’t have time to put in the mini TL;DR version I try to at the end. Dave and I did run through the highlights at the podcast. Check that out if you haven’t tuned in already.

– Josh Dobbs. Not perfect. But better. Decision making improved, taking the checkdown, getting the ball out on time. Has to know where the pressure is at and not run into it but yesterday was his best practice. As noted in the podcast, I think he shows good command of the huddle. Gets to the line quickly, not a lot of miscommunication, being a leader at the line. You can see a huge difference between him and the other rookie QB, Bart Houston.

– James Conner was arguably the best player on offense Sunday afternoon. Strong and square in pass pro and keeps his feet moving laterally. Not lunging there and his size lets him not get overwhelmed by bull rushes. The little guys have to cheat and “brace” for the power because they won’t handle it otherwise. Conner can naturally handle those better.

– Trey Williams shows burst. Explosive, twitchy guy with good feet. Can play a little out of control, eyes working faster than his feet, but don’t be surprised if he busts at least one nice run/return in a preseason game.

– Fitz Toussaint is going to be steady. Well-rounded game. Path to the 53 is still hard for me to find but the team knows what they have in him. A level of comfort you want with your depth.

– Xavier Grimble. Man, he’s killing me. The dude is clearly talented, clearly putting in work during the offseason. But when Dave told me left early because of the heat, my heart sank.

Checked my notes from last season. Grimble left because of the heat/cramps on Days One and Three in 2016. And then he’s out today for the same reason, a full year with the team and an offseason to know how to take care of your body. He looks the part, dude is rocked, but something is amiss.

– Phazahn Odom. Tough day. He’s good at catching the football in space. Everything else? Pad level, working out of a three point stance, taking on pass rushers, it’s a struggle. None of this should be a surprise if you were following what we said leading up to camp.

To his credit, he did finish out the day. Considering two other tight ends didn’t, Grimble and Scott Orndoff, that alone nearly counts as a win. Nearly.

– T.J. Watt has had bright moments but they haven’t often come against Alejandro Villanueva. Villy has been the winner in almost every matchup. So big, strong, heavy hands you can’t shake when he gets into your pads. The starting five is great, obviously, but Villanueva might be having the best camp if you look at these three days in a vacuum.

– I’m all about the squatty, powerful dudes. And the Steelers have those in spades. Kyle Friend and Mike Matthews are cut from a similar cloth. Ethan Cooper is short too but he’s is a wiiiiiiiide load. Seeing him in pads, his thighs/calves gives Daniel McCullers a run for his money. Shows the strength to anchor against bull rushes. Just needs to keep his hands lower.

– Not a ton going on here. No one really stuck out in OL/DL – felt like a lot of these dudes were gassed. Johnny Maxey might be showing more of a repertoire as a pass rusher. Which is good considering he showed pretty much nothing last year. Just leaning on dudes. Still second team right defensive end. L.T. Walton at the nose.

– Watt has been out there for every rep and looks like the same guy at the end of practice as he does at the start. That’s why having a football family background is helpful in the draft evaluation. You know he knows how to take care of his body, how to work out, how to be an efficient, conditioned practice player. Easy-mover dropping into his hook zone in coverage. Like his hand use, an advanced area of his game coming out of Wisconsin.

Like I said, still struggling versus Villanueva, but he’ll get better.

– Mentioned it on the podcast. Farrington Huguenin is interesting. Above average athlete who is able to change direction. Had several wins in one-on-ones and team sessions. Practice squad material, especially if Keion Adams beats out Arthur Moats on the 53.

– Anthony Chickillo is always a star of camp. Really impressive how far he’s come; a fat, out-of-place defensive end in college to a guy with the ability to start somewhere else. Give Joey Porter some credit, too.

– Have said time and time again the team is high on Tyler Matakevich. One reason why they didn’t make a big push to add to the position after swinging and missing on Dont’a Highetower. The guy just makes plays, as trite as that sounds. Two TFL in the first team session yesterday. No doubt he is Vince Williams’ top backup.

– And L.J. Fort continues to make plays opposite. No lie, Fort is the second most athletic ILB on the roster, behind Shazier. Does a great job in coverage and fits well as the Mack (weakside) linebacker. Near INT yesterday on a pass for Odom.

– Artie Burns is playing with some swagger and I love it. Came bounding down onto the field, nearly sprinting, with a big smile on his face. And holding his own against Antonio Brown. Mentioned one of the detail plays he made yesterday; after Brown made a diving grab on an underthrown ball, Burns crawled back to AB to grab his ankle and officially get him down. It sounds really small, I know, but devil is in the details. That was a problem for him last year. Tells me the game is slowing down for him.

– Mike Hilton’s energy is pretty infectious. And aggressive against the run. Basically everything you saw from him at Ole Miss. Had one breakup in WR/DB one-on-ones, an environment that is obviously slanted heavily in favor of the offense.

– With the injuries at corner, guys like Greg Ducre (who will run 2nd team if Golson is out) and Brandon Dixon get more consistent play-time. William Gay may get some time off too, though that could actually make the CB group too thin. May have to think about signing someone. Weber State’s Devonte Johnson was in rookie minicamp. Often times, those guys circle back come camp (Jawon Chisholm, Matt Dooley for example).

– Not a lot going on here. Jordan Dangerfield made a couple of plays in coverage, though they were underneath. Never really seen him tested over the top. Wish we could gauge it.

What To Watch For

– Just a couple notes because I know I wrote another novel.

– Definitely a good time for guys like Demarcus Ayers and Grimble to make some plays. They could use some positive press in team sessions. Neither have been bad but you want to grab some headlines when you’re in the spots they are.

– Going to try to watch more from the second team DL of Alualu, Walton, and Maxey. Need to learn more about those guys, especially Walton at the nose.

– Sean Davis might be the top safety if Mitchell misses. Make a splash play my man.