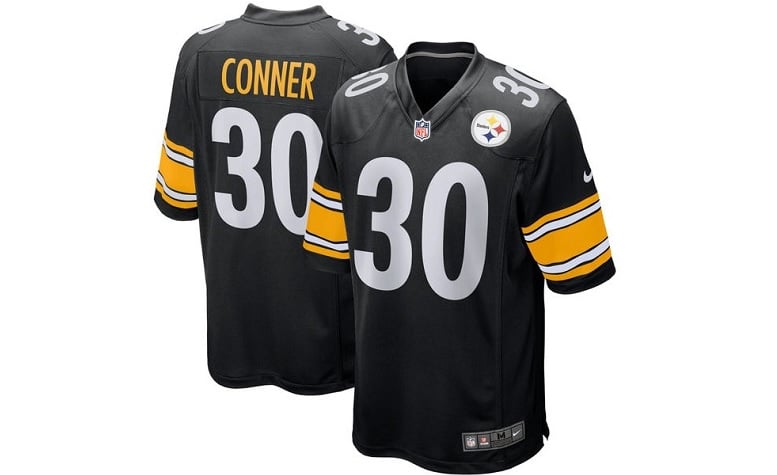 When the Pittsburgh Steelers hold their first training camp practice of 2017 at Saint Vincent College in Latrobe a week from Friday, you’ll likely see a lot of No. 30 jerseys in the stands and on the hills if you’re in attendance.

According to a recent jersey sales report issued by Dick’s Sporting Goods, Steelers rookie running back James Conner and his No. 30 jersey, specifically, ranks No. 2 overall among all NFL players. Predictably ahead of him is New England Patriots quarterback Tom Brady and his No. 12 jersey. These latest rankings come on the heels of NFLShop.com ranking Conner No. 11 overall in jersey sales this past May.

Conner, who was selected in the third-round of this year’s draft by the Steelers after playing his college football at the University of Pittsburgh, was instantly a predictably a favorite of fans of the Black and Gold not only because of him being a productive player for the Panthers, but also because he battled and ultimately beat Hodgkin lymphoma in 2015.

During the Steelers offseason practices, Conner was limited by a hamstring injury. He is, however, expected to be ready to practice fully at the start of training camp.

As for other Steelers players jersey sales listed in the top 50 on the report issued by Dick’s Sporting Goods, wide receiver Antonio Brown is listed 10th overall and he is followed by running back LeVeon Bell at 21st overall, rookie outside linebacker T.J. Watt at 25th overall and quarterback Ben Roethlisberger at 47th overall.